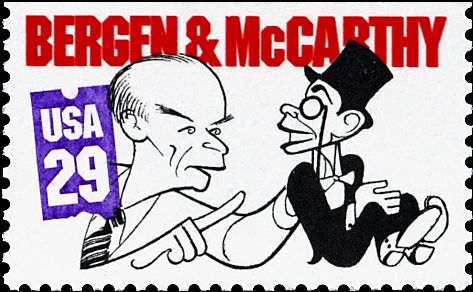 Edgar Bergen, born Feb. 16, 1903, was an entertainer who found fame as a ventriloquist and radio performer. He began his career in vaudeville and nightclubs with his wise-cracking dummy Charlie McCarthy, later joined by other puppet characters including Mortimer Snerd and Effie Klinker.

Though fame for a ventriloquist on the radio seems unlikely, the strength of Bergen's performance and his captivating banter with his dummies entertained radio listeners on regular programs from 1937 to 1956. The show would include prominent guest stars who would interact with dummies, including W.C. Fields, whose ongoing feud with Charlie was a comedic highlight.

Bergen's young daughter Candace, who would later find fame as a film and television actress, appeared on the show as well.

Bergen and his wooden associates were featured in films and made regular appearances in clubs and on television. Bergen was also an occasional film and TV actor on his own.