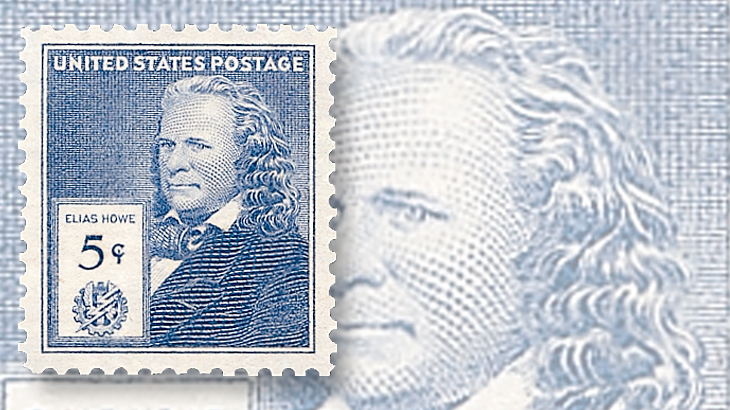 Elias Howe is recognized on a 5¢ commemorative from 1940 for his innovations in his development of a lockstitch sewing machine.

A machinist and inventor from Massachusetts, Elias Howe was born July 9, 1819, and developed a practical sewing machine with lockstitch design at age 25.

After patenting his device, Howe tried and failed to successfully market his machine in the United States. He traveled to Europe in an effort to find backing there, but returned to America dejected and almost out of money.

Competitors copying Howe's invention, however, had more success with their products, and after a lengthy series of legal suits, Howe received royalties from machines sold that had duplicated his patented innovations.

With his unexpected wealth Howe established his own machine company near Connecticut's Pequonnock River in 1863, and found success manufacturing and selling his new sewing machines. Though in declining health, at age 42 he enlisted in the Union Army, serving as regimental postmaster.

Howe died at age 48 in 1867. As a tribute to his invention, which revolutionized clothing manufacturing, Howe was commemorated on a 5¢ stamp in 1940 as part of the American Inventors set in the Famous Americans series (Scott 892).