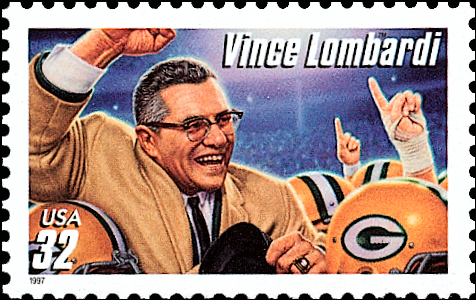 Printing in the margin of the 1997 Legendary Football Coaches stamp pane of 20 reads “Vince Lombardi — He coached high school, college and professional teams. His nine years with the Green Bay Packers made him nationally famous.”

Vincent Thomas Lombardi, who will forever be associated with Wisconsin’s Green Bay team of the 1960s, was born June 11, 1913, in Brooklyn, N.Y. He studied for the priesthood at Cathedral College of the Immaculate Conception, but in 1932 he enrolled at St. Francis Preparatory High School and then accepted a football scholarship from Fordham University.

He found coaching positions at St. Cecilia High School in New Jersey, Fordham, and at the U.S. Military Academy at West Point, before he was named offensive coach of the New York Giants in 1954.

Appointed head coach of the Packers in 1959, Lombardi was able to reverse the fortunes of the struggling team, taking them to a winning record in his first year, followed by five NFL championships, and victory in the first two Super Bowls in 1967 and 1968.

Lombardi coached the Washington Redskins for the 1969 season. He died in 1970, and was elected to the Pro Football Hall of Fame the following year.

Vince Lombardi was honored on two similar stamps in 1997: the 32¢ stamp (Scott 3145) in a pane of 20 that also honors coaches George Halas, Bear Bryant and Pop Warner; and a 32¢ printed with a red stripe above Lombardi’s name (Scott 3147), which was issued in panes of 20 containing only the Lombardi stamp.