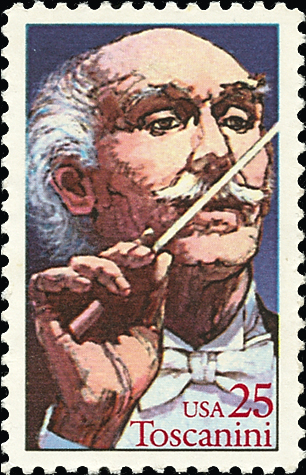 One of the world's foremost music conductors, Arturo Toscanini, was born March 25, 1867, in Parma, Italy.

Toscanini studied the cello, but while in Rio de Janeiro at age 19 he was pressed into service as conductor for a performance of Giuseppe Verdi's Aida, which he accomplished from memory. By 1898 he was named as music director at the famed La Scala in Milan, and 10 years later he was leading the New York Metropolitan Opera. Following a return to La Scala, he became musical director of the NBC Symphony Orchestra, which was established specifically for him. He retired in 1954, and died three years later at age 89.

The United States Postal Service issued a 25¢ stamp honoring Toscanini on March 25, 1898 (Scott 2411). The stamp is the 11th in the Performing Arts series, and was designed and illustrated by Jim Sharpe, who used a photograph by Robert Hupka for his model.