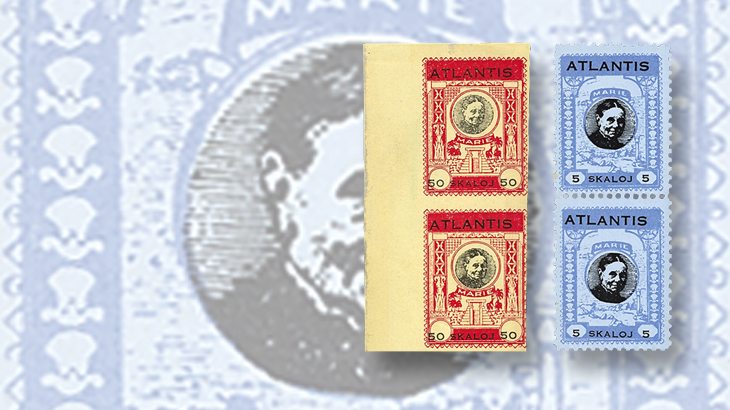 The Atlantis stamplike labels of the 1930s were produced both imperforate and with perforations. 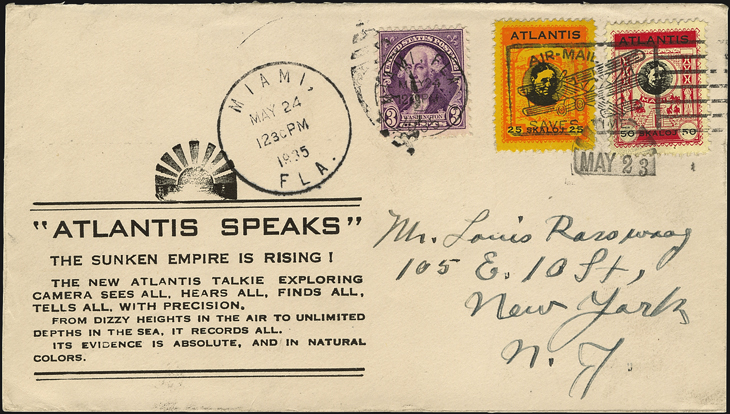 Atlantis rediscovered! At least that is what the creator or creators of this 1935 cover and the Atlantis stamplike labels would like us to believe.
Previous
Next

The ancient Greek philosopher Plato mentioned the fabled lost continent of Atlantis (dated at 9000 B.C. somewhere in the Caribbean) in his dialogues Timaeus and Critias.

While Atlantis might have been lost to the modern world geographically speaking, like many other figments of imagination, it lives on through stamps or postal history, such as the 1935 cover shown nearby.

This cover bears a United States 3¢ George Washington stamp and two stamplike labels, or cinderellas, from the six-stamp second issue of Atlantis.

These labels feature black vignettes showing a portrait of Princess Marie. Denominations and colors are 5 skaloj blue, 10s tan, 25s yellow-orange, 50s red, 75s green, and a 1-dialo high denomination, which I have not seen and don’t know the color of.

These labels were issued both imperforate and perforated gauge 11½.

According to Robert W. Murch, writing in the Twenty-third American Philatelic Congress: 1957 book, the first Atlantis labels appeared in 1934, along with an Atlantis passport, a flag, banknotes, and a seafaring stranger by the name of Capt. J.L. Mott, seen driving a black sedan in Miami with Atlantis license plates. Murch’s article is titled “Album Weeds: The Postal History of the Lost Continent of Atlantis.”

From 1934 to 1940, covers appeared in the philatelic marketplace to and from Atlantis, often with Bahamas stamps added. Captain Mott disappeared in 1940, and no further philatelic evidence of Atlantis was released from his efforts.

The cover shown here bears an Atlantis cancellation dated May 23 on the two Atlantis labels. The more familiar Miami, Fla., duplex handstamp of May 24 and a machine cancel show that it traveled in the United States mail from Florida to the addressee in New York City.

The cover is advertising a film titled Atlantis Speaks. The cachet reads:

“The sunken empire is rising! The new Atlantis talkie exploring camera sees all, hears all, finds all, tells all with precision.

“From dizzy heights in the air to unlimited depths in the sea, it records all.

“Its evidence is absolute, and in natural colors.”

Apparently this talkie is also lost to history, but again, philately comes to the rescue.