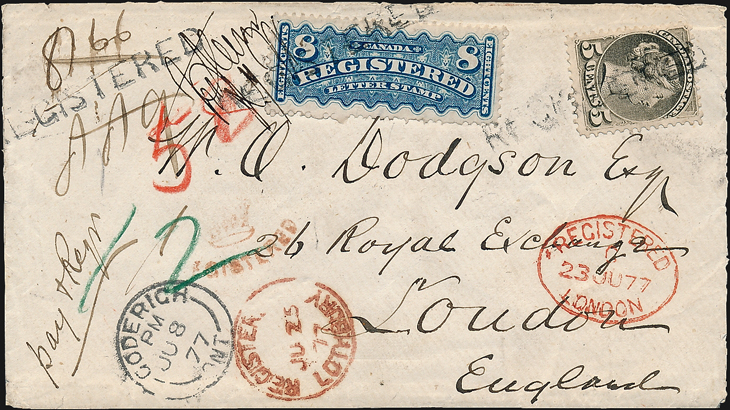 The auction firm Sparks in Ottawa, Canada, will offer the Daniel Cantor collection of Canada’s Small Queens stamps and postal history in a Nov. 24 public auction. More than 520 lots will be auctioned in the Sparks auction room.

The 1870-97 Queen Victoria definitives known as the Small Queens provide abundant collecting possibilities. The stamps themselves are found with numerous well-documented varieties, and the postal history captures the imagination with 19th-century mail traveling to destinations throughout the Commonwealth and the world.

In his introduction to the auction catalog, Cantor writes, “Due to the fact that the Small Queen issue straddled the pre-UPU [Universal Postal Union] and the UPU periods, the postal history of the issue is rich with ever-changing postal rates and regulations, and it also represents the first stamp issue of Canada where postal history material exists to destinations that cover most countries in the world.”

The auction lots include proofs and specimens; many printing, paper and production varieties; stamps of each denomination in various singles and multiples; and postal history that shows usages to a great range of destinations.

The 8¢ registered letter stamp (Scott F3) is a choice item on cover, with just 16 known using the 8¢ stamp for its intended purpose. The 2015 Scott Classic Specialized Catalogue of Stamps and Covers specifically notes that the catalog value of $12,000 for the stamp on cover “is for a correct usage in 1876-1877.”

This cover qualifies, with the 5¢ stamp (Scott 38) paying the pre-UPU rate and the 8¢ stamp fulfilling the fee for registration. From Goderich it traveled through Toronto and Lothbury, picking up a wonderful red crown registered cancel on the front.

Sparks points out the top condition of this cover franked with the 8¢ stamp compared to others that have faults. It is described as one of the key items in the Cantor collection, formerly from the collections of Bill Simpson, S.J. Menich and William H. Gross, as well as the 1994 “November” collection.

The cover is offered by Sparks with an estimate of $15,000 Canadian, which equals approximately $11,400.

The many stamps and covers in this auction can be viewed at the auction Sparks website.

The auction is also presented on Stamp Auction Network. Bids are also accepted by mail, email, fax and telephone following the Sparks Auctions terms and conditions.