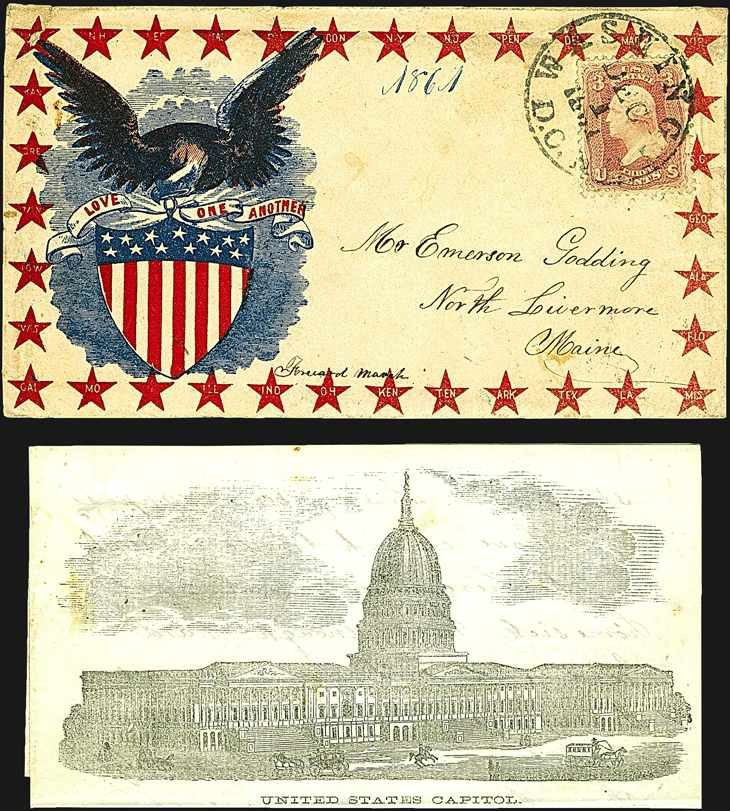 Siegel’s Sept. 30 sale of the Gilbart collection will feature several patriotic covers, including this 1861 cover sent from Washington, D.C., to Maine (top). The cover comes with its original contents, written on U.S. Capitol letterhead (bottom). 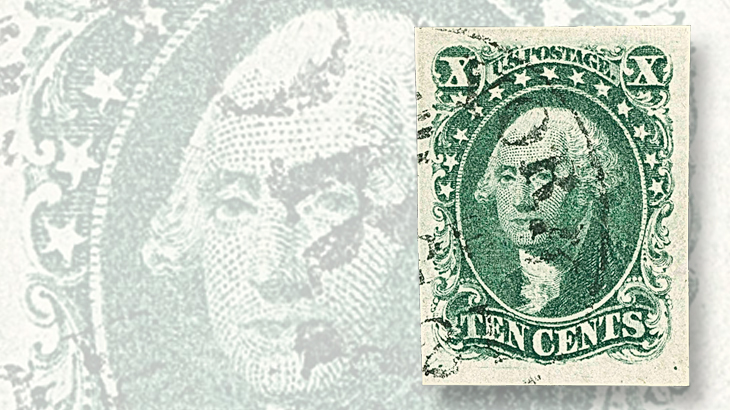 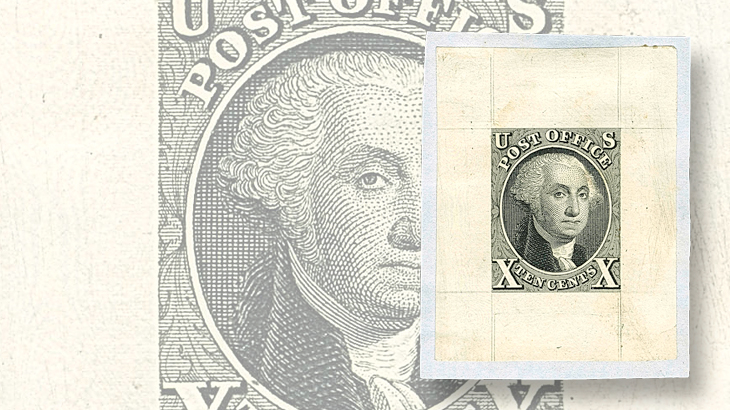 Kenneth D. Gilbart’s exhibit collection of United States 1847-1869 issues includes this unique essay of the 10¢ 1847 stamp. Siegel is selling the collection in its Sept. 30 sale. 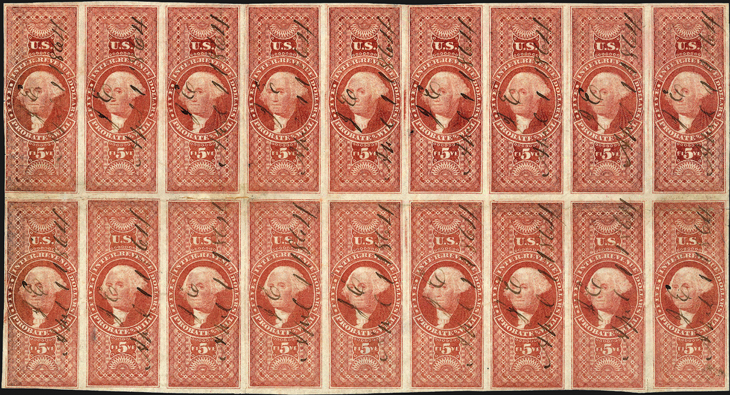 The Oct. 1 Siegel sale of the second part of the Dan Curtis collection of U.S. revenue stamps will feature this attractive block of 18 of the imperforate $5 Probate of Will (Scott R92a). 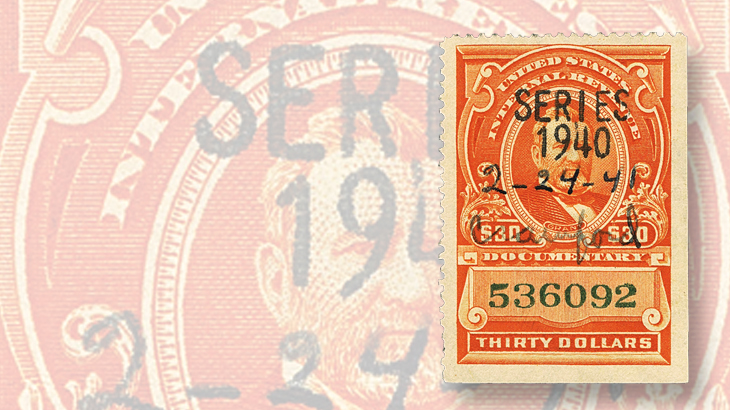 A highlight of Siegel’s Oct. 1 sale of the Curtis collection is this $30 vermilion Documentary from the series of 1940 with the black two-line handstamp in larger type (Scott R282a). 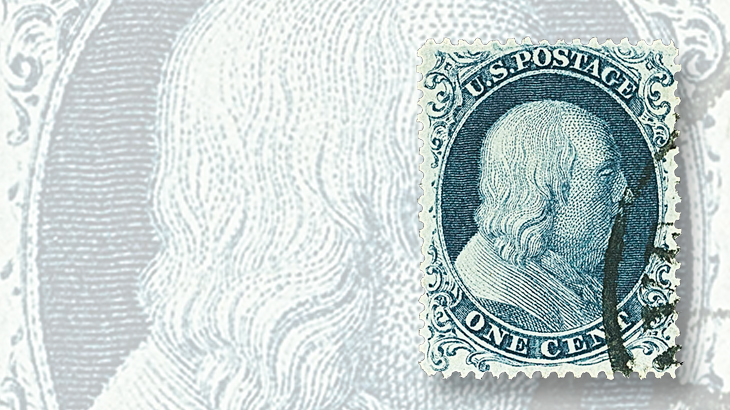 The Sept. 29 Siegel sale of the Bowman collection includes this 1857 1¢ Benjamin Franklin. A 2008 PSE graded certificate (XF-Superb 95) accompanies the stamp.
Previous
Next

First across the auction block, on Sept. 29, will be the impressive collection of outstanding United States stamps formed by Robert Bowman.

Each stamp in the Bowman collection is among the finest available for overall grade and appearance. Many of them likely will attract spirited bidding among collectors eager to add a nice stamp to their collection, or upgrade one with less eye appeal.

One of the first stamps to come up in the Bowman sale is a used imperforate 10¢ green George Washington Type I (Scott 13) with a 2007 Professional Stamp Experts certificate assigning it the lofty grade of Superb 98. Siegel notes that just four other examples of this stamp share this grade, with only one grading higher: Superb 98J, for jumbo margins.

The stamp comes from position No. 100 of the right pane of 100 printed from plate 1. The Type I stamp is identified by the complete scrolls at the bottom of the design.

Siegel describes the stamp as having “huge margins all around” and “rich color on bright paper.”

An unobtrusive strike of a New York Ocean Mail circular datestamp does not detract from the stamp’s overall appearance.

Among the highlights of Bowman’s 1857 stamps is a 1¢ blue Benjamin Franklin Type Ia (Scott 19) that Siegel describes as having “perforations completely clear of the design and showing the full type characteristics at bottom.”

In its lot description, Siegel explains the origins of the Type Ia stamps: “Type Ia stamps were produced from 18 of the 20 bottom-row positions on Plate 4. After perforations were introduced in mid-1857, sheets on hand printed from Plates 1 Late and 2 were fed through the new perforating machine, but the narrow spaces between stamps made perforating difficult to accomplish without cutting into the designs.”

A 2008 PSE certificate accompanies the Bowman example of Scott 19, which received a grade of XF-Superb 95.

The 1869 Pictorials and 1870-88 Bank Note series also are well-represented, as are the various Washington-Franklin issues.

The Sept. 30 Gilbart sale opens with the unique 10¢ 1847 Washington issue essay (Scott 2-E1) that Siegel describes as “the only recorded essay incorporating both the vignette and frame for the 10-cent issue in private hands.”

In the Scott Specialized Catalogue of United States Stamps and Covers, the essay is described thus: “Incomplete engraving of entire design, area around vignette incomplete, frame lines and ‘RWH&E’ printer’s initials not yet added.”

Siegel describes the essay as being “mounted on thin blue card which has portions of banknote designs pasted onto back …” A small bit of paper adheres to Washington’s left eye.

There also are numerous stamps on offer, beginning with the 1847 first issues, and concluding with the 1869 Pictorials. Collectors can find attractive examples to fit a wide range of budgets.

Postal historians will find much to attract their attention in the Gilbart collection.

Some particularly colorful patriotic covers will be on offer, including an 1861 cover featuring what Siegel calls the “34 States on Stars, Eagle and Shield Patriotic” design.

A 3¢ George Washington (Scott 64) paid the required postage to mail the cover from Washington, D.C., to North Livermore, Maine.

As an added bonus, the cover comes with its original enclosure, a letter from a soldier in the 7th Maine Regiment that he wrote on letterhead from the U.S. Capitol.

Siegel’s Oct. 1 sale of Part 2 of the Dan Curtis collection of U.S. revenue stamps will bring an impressive array of material onto the market.

Leading off are numerous essays and proofs, with many of the proofs offered in blocks of four and larger multiples, including full sheets.

Multiples of the issued stamps also are available.

A very nice horizontal block of 18 of the imperforate $5 Probate of Will (Scott R92a) is neatly canceled with April 1, 1864, manuscript cancels. According to Siegel, the block has a “few pressed-out creases causing small tears” and “tiny thin specks at right.”

Siegel describes the block as a “marvelous showpiece” and the “second largest recorded multiple” of Scott R92a. Only a block of 21 surpasses it in size.

One of only two examples known (according to a census kept by Curtis) of the $30 vermilion Documentary from the series of 1940 with the black two-line handstamp in larger type (Scott R282a) is one of the highlights of the Curtis sale.

Excellent centering and vivid color are key features of this stamp, which has serial No. 536092 and a manuscript cancel that reads “2-24-41 Crawford” in two lines.

For more information about the Bowman, Gilbart and Curtis sales, visit the Siegel website; email stamps@siegelauctions.com; or phone 212-753-6421.

Online bidding also will be available via Stamp Auction Network.