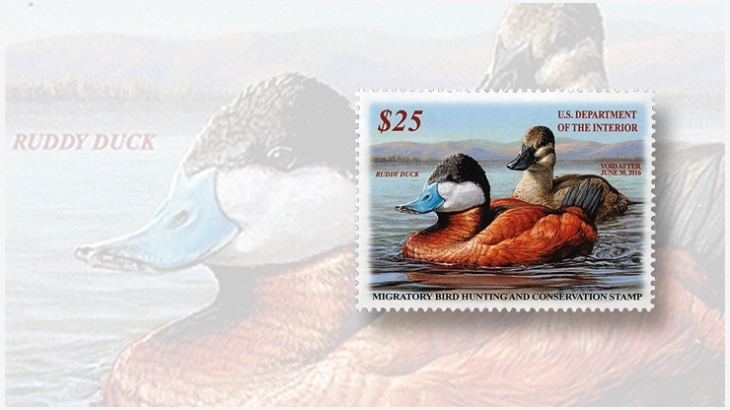 The 2016 Canada duck stamp has been released, but this isn't it. This is a 2015 U.S. federal duck stamp. To see Canada's newest, which features the Surf Scoter, visit www.whc.org.

Artist Pierre Leduc is a veteran when it comes to the art competition for the Canadian Wildlife Habitat Conservation Stamp, also known as the Canadian duck stamp.

After having his art featured on the 1995 Redhead and the 2006 Brant Geese stamps, Leduc returns with his depiction of Northern Canada’s Surf Scoter duck.

“The Surf Scoter is a large sea duck which breeds in Northern Canada and Alaska, and winters along the Pacific and Atlantic coasts,” the Wildlife Habitat Canada website reads. “The drake is easily identified by a full black body, except for white patches on the nape and forehead, and its unique bulbous red, yellow and white bill.”

This particular duck is known to for its exceptional eyesight, as well as the ability to fly fast and close to water.

Check out the new stamp.

In more news from the north, Canada Post has released a pair of stamps honoring the fictional Capt. James T. Kirk and Starship USS Enterprise from the original Star Trek TV show.

What else is there to know about this galactic stamp set?

The third National Parks stamp design was unveiled this week by the United States Postal Service, and it features a revered American animal.

Learn more about the horses and this new series.