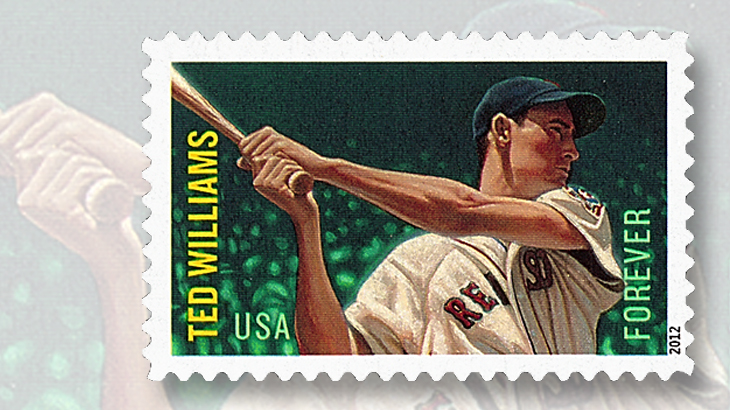 One of baseball's finest hitters, Ted Williams was commemorated on a forever stamp in 2012.

The United States Postal Service has honored numerous sports stars over the past 20 years or so, and baseball players seem to be among the USPS favorites. On July 20, 2012, four forever stamps honoring Major League Baseball All-Stars were issued, with portraits of Ted Williams (Scott 4694), Larry Doby (4695), Willie Stargell (4696) and Joe DiMaggio (4697), four of the game’s greatest hitters.

During World War II, Williams served as an aviator for the U.S. Navy, and in 1952 he returned to active duty with the Marine Corps and flew 39 combat missions in the Korean War. He returned to baseball the next year.

Williams played for the Red Sox for the rest of his career, retiring in 1960. He won the American League batting title six times, and he hit 521 home runs, leading the league in four different seasons.