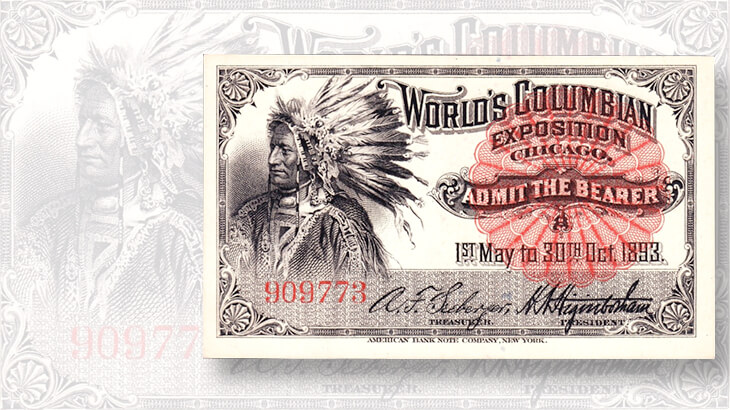 The beautifully engraved 1893 Columbian Exposition tickets make a nice addition of collateral material to a stamp collection and are a good buy at $10 to $25 each.

The Chicago World’s Fair and Chicago Columbian Exposition, held May 1 to Oct. 30, 1893, is well-known to stamp collectors because of the set of 16 stamps (Scott 230-245) issued to commemorate it. The event marked the 400th anniversary of Christpher Columbus’ first voyage to the New World. There are other collectibles associated with the event that can enhance a collection.

Columbian Exposition tickets are beautifully engraved and can add pop to any collection. At the moment, they are also hot with several categories of collectors actively buying them.

Many of the collectors who are driving the prices up have no historical or market perspective to realize how common these tickets are. More than 27 million people attended the event, and large numbers of tickets survive.

Dealers are actively snapping up sets of six tickets, because they know they can quickly turn them around with a good mark up. The scarcest engraved ticket is the one featuring Handel. But scarcity doesn’t seem to be what is driving today’s market.

You can probably buy the individual tickets for $10 to $25 each. You can find plenty being sold to collecting novices for more, but there are enough to go around at lower prices. When buying, just make sure that the tickets are bright, fresh, and undamaged.