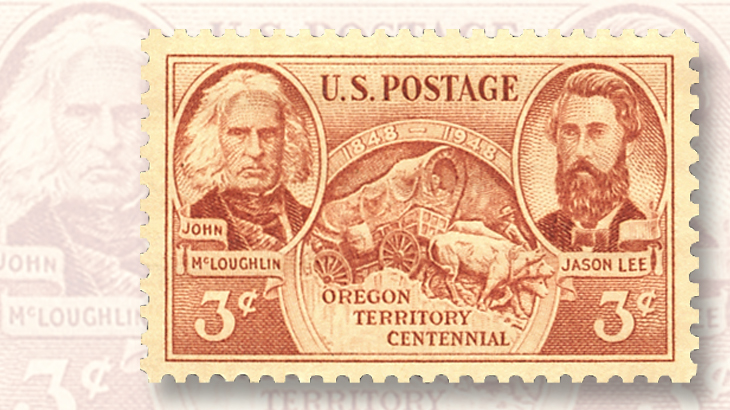 The 3¢ stamp issued Aug. 14, 1948, to commemorate the 100th anniversary of the establishment of the Oregon Territory (Scott 964) pictures two men: John McLoughlin, who was the head of the Hudson’s Bay Columbia District, and missionary Jason Lee.

Lee was born June 28, 1803, in Stanstead — then in Lower Canada, today in Quebec — and studied at Wilbraham Wesleyan Academy, graduating in 1830.

He accepted an assignment as a Methodist missionary to preach to Indians of the Pacific Northwest, and embarked on the long journey west to Fort Vancouver. There he met with McLoughlin, and in 1834 Lee established his first mission, on the Willamette River.

Lee’s mission relocated and grew with the arrival of additional settlers in 1837. Contrary to the intentions of the Methodist Mission Board, Lee became involved in organizing the new territory, which he proposed should be settled by the United States government. He established a school for the children of settlers in 1842 that eventually became Willamette University in Salem, Ore.

Lee died at age 41 in 1845 while visiting relatives in Stanstead.