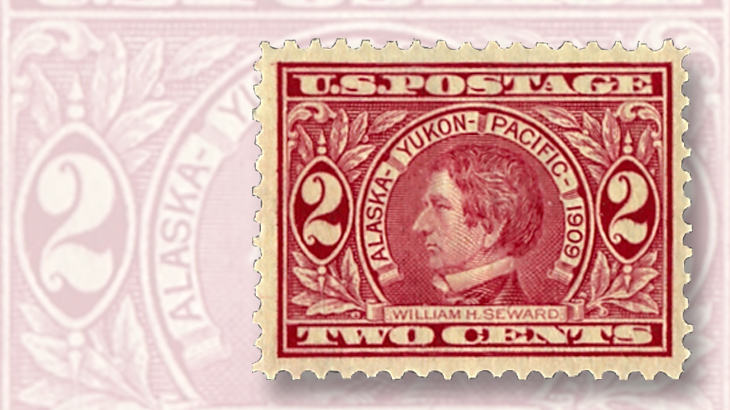 The 1909 2¢ William H. Seward commemorative was issued perforated and imperforate.

William Henry Seward, secretary of state under presidents Abraham Lincoln and Andrew Johnson, was born in Florida, N.Y., on May 16, 1801. As a youngster he enjoyed learning, and he entered Union College in Schenectady at age 15, graduating in 1820.

Seward studied law in New York City and was admitted to the bar in 1822, practicing in Auburn, N.Y. He married Frances Miller in 1824, and began his involvement in politics, supporting the election of John Quincy Adams for president. He became state senator in 1830, and was elected governor of New York in 1838.

Supporting antislavery efforts, Seward was elected to the U.S. Senate in 1849, and was considered as the Republican Party candidate for president in 1860. Abraham Lincoln was nominated instead, and upon his election he named Seward as his secretary of state.

On the night of April 14, 1865, when John Wilkes Booth shot and killed Lincoln, 20-year-old Lewis Powell sought to assassinate Seward, who was recovering at home from a recent accident. Powell entered the home and stabbed Seward, but Seward survived and recovered, though he bore a knife scar on his face from the attack. Powell was tracked down, arrested, convicted and sentenced to death.

In 1867, Seward successfully negotiated the purchase of Alaska from Russia. The $7.2 million price tag caused the agreement to be dubbed “Seward’s Folly” by Congressional opponents, but the treaty proved to be a shrewd deal for the United States.