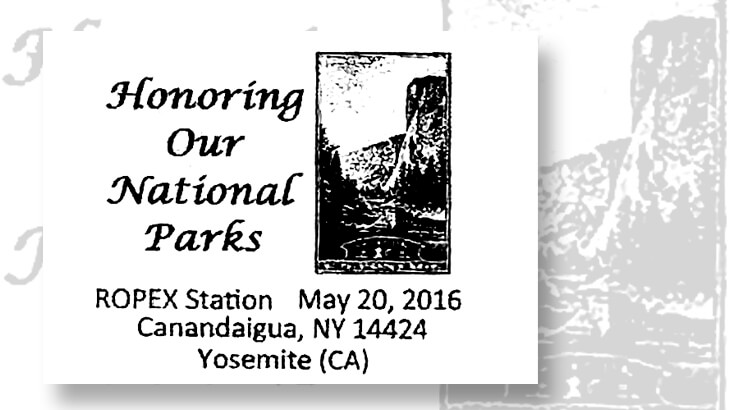 Three postmarks honoring 100 years of the National Park Service are offered by the Ropex stamp show and exhibition in Canandaigua, N.Y.

The 2016 Ropex stamp show, sponsored by the Rochester Philatelic Association in New York, is scheduled for May 20-22 at the Greater Canandaigua Civic Center, 250 N. Bloomfield Road in Canandaigua, N.Y., southeast of Rochester.

The show is offering a different pictorial postmark with the same National Parks theme for all three days.

The National Park Service is celebrating its 100th anniversary in 2016, and the show will celebrate with postmarks that recall the designs of the popular National Parks commemorative stamps issued in 1934.

The postmark on Friday, May 20, shows the vignette of the 1¢ stamp from the 1934 series, picturing the El Capitan rock formation in California’s Yosemite National Park.

The Saturday postmark (May 21) depicts the 5¢ stamp design of the Old Faithful geyser in Yellowstone National Park, which extends over Wyoming, Montana and Idaho.

On Sunday, the design captures the image of the 10¢ stamp and its view of the Great Smoky Mountains in North Carolina.

Requests for these postmarks all go to the same address, so it’s important to specify which postmark you want to receive when making your request.

Also keep in mind that your envelope must be franked with enough postage to fulfill the current first-class letter rate of 47¢.

To obtain any or all of these Ropex National Parks postmarks, send your request to: