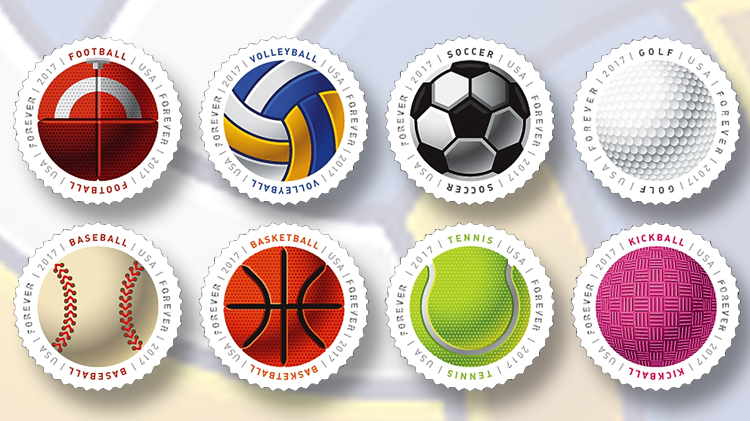 Eight round forever stamps featuring different balls used in sports will be issued as a set in 2017. 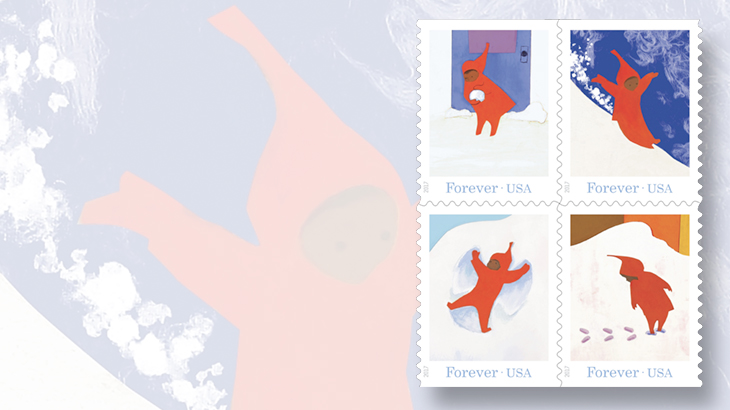 Original artwork by Ezra Jack Keats from his classic 1962 children's picture book The Snowy Day will illustrate four stamps in 2017. 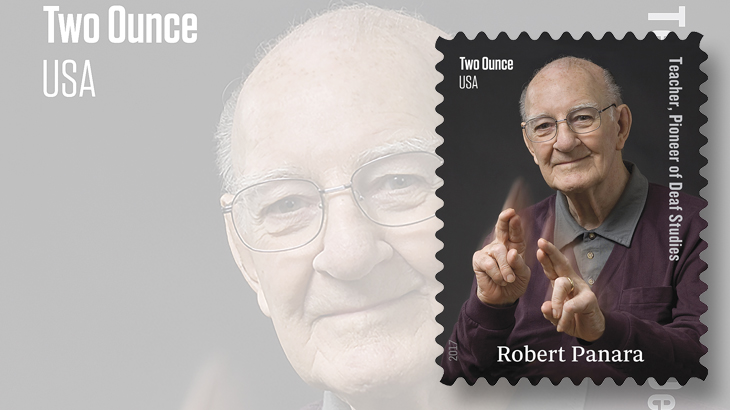 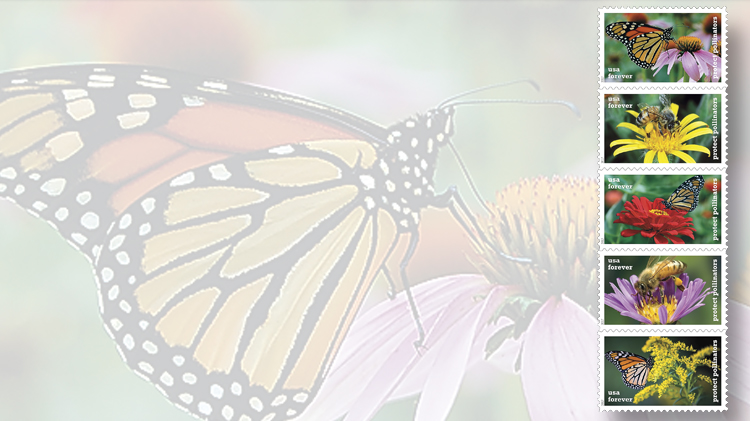 Five planned forever stamps for 2017 with the theme "Protect Pollinators" show the monarch butterfly and the Western honeybee. 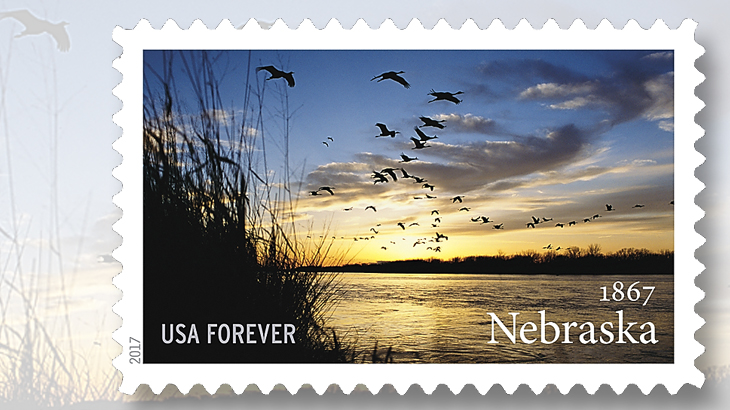 Sandhill cranes are shown in flight on a forever stamp planned for 2017 to mark the 150th anniversary of Nebraska statehood. 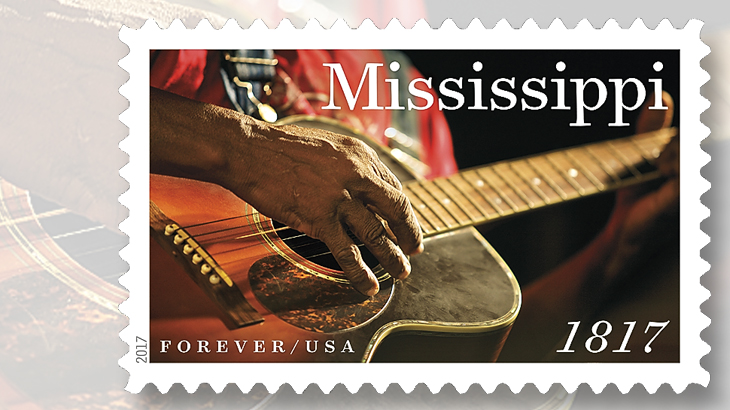 A forever stamp commemorating the Mississippi statehood bicentennial will be issued in 2017. The stamp features a 2009 photograph showing a close-up of a guitar player's hands. 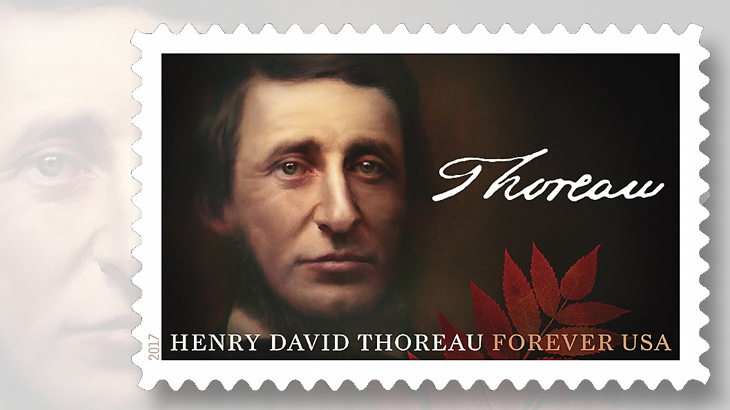 The birth bicentennial of American writer Henry David Thoreau (1817-62) will be honored on a forever stamp in 2017. 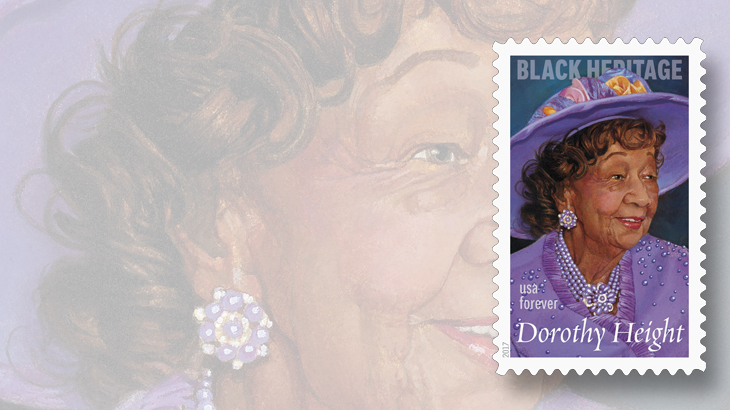 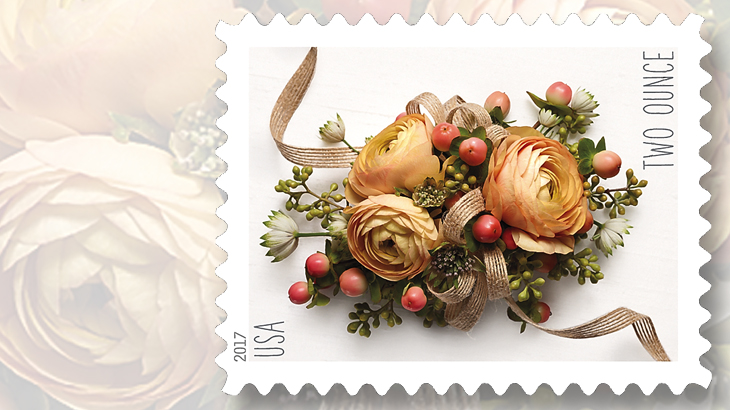 A corsage is the central design of this planned two-ounce rate stamp for 2017, suitable for most wedding invitation mailings. 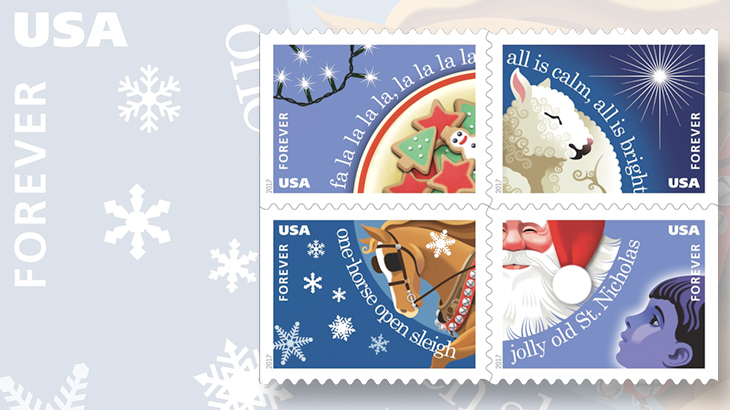 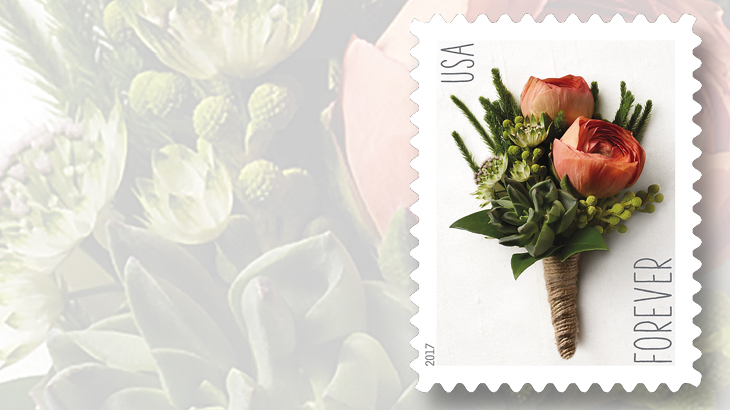 A boutonniere is featured on a planned 2017 forever stamp offered for use on wedding RSVP envelopes and cards. 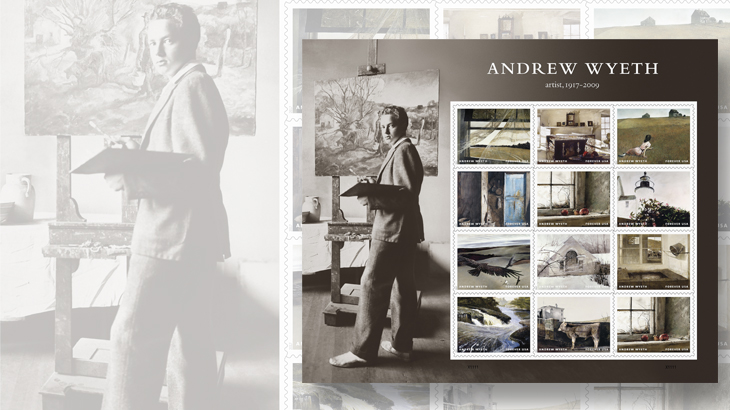 Twelve paintings by Andrew Wyeth (1917-2009) are featured in a planned 2017 set honoring the artist.
Previous
Next

The United States Postal Service has revealed 40 new stamp subjects that will be issued in 2017.

These new subjects follow an earlier group of 38 stamps revealed Sept. 20, which were published in the Linn’s Stamp News issue of Oct. 10.

The newly announced stamp subjects include activist Dorothy Height, to be honored with a forever stamp in the Black Heritage series; the 150th anniversary of Nebraska statehood; two stamps showing a boutonniere and a corsage, suggested for use on wedding invitations; the 200th anniversary of Mississippi statehood; teacher and deaf studies pioneer Robert Panara, with a stamp in the Distinguished Americans series; eight round stamps showing sports balls; artist Andrew Wyeth, honored on a pane of 12 stamps featuring different paintings; author Henry David Thoreau; pollinating insects depicted on five stamps also showing flowers; The Snowy Day, a children’s picture book by Ezra Jack Keats that will be commemorated on four stamps; and well-known Christmas carols celebrated on a set of four stamps.

All of the announced stamps are nondenominated. Most are planned as forever stamps, though two are to be issued to fulfill the 2-ounce postage rate.

Issue dates were not revealed.

The 40th stamp in the Black Heritage commemorative series will honor Dorothy Height (1912-2010), an activist for civil rights and women’s rights who served as president of the National Council of Negro Women for 40 years.

Height was a recipient of the Presidential Medal of Freedom in 1994 and the Congressional Gold Medal in 2004. She stood with Martin Luther King Jr. as an organizer of the 1963 March on Washington, and was an honored guest at the 2008 inauguration of President Barack Obama.

The gouache and acrylics portrait of Height on the new nondenominated forever stamp was painted by Thomas Blackshear, based on a 2009 photograph by Lateef Mangum.

A forever stamp celebrating the 150th anniversary of Nebraska statehood will feature an outdoor scene.

“Nebraska photographer Michael Forsberg set up among prairie grasses on the riverbank between the small cities of Grand Island and Kearney to capture the image shown on the stamp,” the Postal Service stated. “In the photograph, sandhill cranes fly low to scout for shelter from nighttime predators.”

The photograph was taken “around the year 2000,” according to the USPS.

Two stamps prepared for use with wedding invitations and response mail (but valid for any other postal use) feature a boutonniere and a corsage.

Both stamps show an arrangement by floral designer Carol Caggiano photographed by Renee Comet. The stamp formats were not announced, but the Boutonniere forever stamp and the Corsage 2-ounce stamp are likely to be issued in separate panes.

The 200th anniversary of Mississippi statehood will be commemorated with a horizontal stamp that features a 2009 close-up photograph by Lou Bopp of a guitar player’s hands.

“Mississippi is the birthplace of many legendary blues artists who created a uniquely American genre of music,” the Postal Service noted. “Among states, the Magnolia State is 32nd in size, and with nearly three million people, it ranks 31st in population.”

Gallaudet University instructor Robert Panara (1920-2014), who was deaf from the age of 10, was instrumental in establishing the field of deaf studies during the 1970s.

He taught at both Gallaudet and at the National Technical Institute for the Deaf at Rochester Institute of Technology.

The forever stamp honoring him features a photograph by Mark Benjamin, official photographer of the National Technical Institute for the Deaf.

Each stamp in a planned set of eight will celebrate a different sport by showing a picture of a ball.

Although the Postal Service suggested in 2013 that the round shape of its global forever stamps would distinguish them from the domestic-rate forever stamps, these round stamps are simply marked “Forever,” and appear to be intended for the lower-priced domestic letter service.

The Sports Balls stamp art was created by Daniel Nyari.

A one-time member of the USPS Citizens’ Stamp Advisory Committee, Andrew Wyeth (1917-2009) is being commemorated during his centenary year with a set of 12 forever stamps issued in a single pane.

The stamps show details of some of Wyeth’s artwork, including his well-known tempera on panel Christina’s World (1948) and the tempera on masonite Soaring (1942-50).

A photograph in the pane’s selvage shows Wyeth at work on a painting in his studio.

The famous American author of Walden, the philosophical 1854 book about living in a natural world, appears for the second time on a U.S. stamp. Henry David Thoreau (1817-62) was first commemorated 50 years ago on the 150th anniversary of his birth (Scott 1327).

The new forever stamp shows a portrait of the author by Sam Weber, highlighted with Thoreau’s last name in his own handwriting on the right side of the stamp.

The phrase “Protect Pollinators” appears along the right side of each of the five stamps that will be issued in 2017 to bring awareness to recent declines in populations of pollinating insects.

The forever stamps each show existing photographs of North American flowering plants being visited by either a monarch butterfly (on three stamps) or a Western honeybee (on two stamps).

The Snowy Day is a children’s picture book from 1962 written and illustrated by author Ezra Jack Keats (1916-83). The main character, Peter, is a black child exploring and playing in his neighborhood in winter snow.

“Long before multicultural characters and themes were fashionable, Ezra Jack Keats crossed social boundaries by being the first American picture-book maker to give the black child a central place in children’s literature,” the book publisher Penguin notes on its Internet site remembering the author.

The stamps will be issued in a 20-stamp booklet, the Postal Service said, and the stamps each show a different illustration by Keats from his beloved book.

“Familiar lines from each song highlight the individual stamps,” according to the Postal Service. “Shades of blue in the stamp backgrounds evoke the evening scenes from the four carols. This booklet of 20 stamps includes five of each design.”

U.S. Postal Service art directors are among those involved in designing the new stamps announced today.

Ethel Kessler designed the Boutonniere and Corsage stamps, and the Robert Panara stamp.

USPS art direct Howard Paine, who died in 2014, was involved in designing the Christmas Carols set, and the Sports Balls stamps were designed by Mike Ryan.