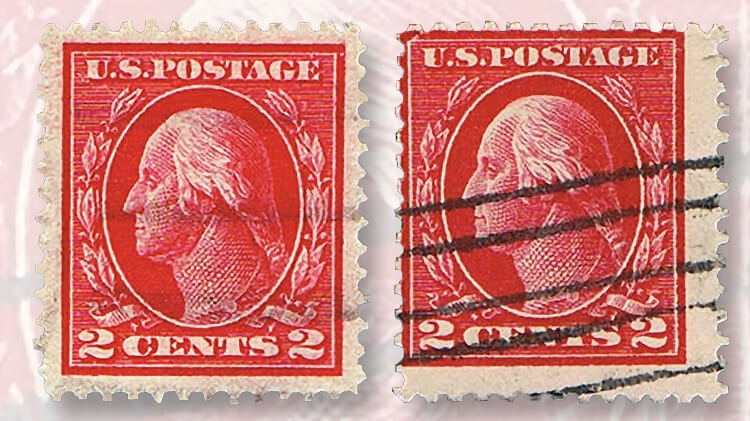 The first issuance of the “2 Cents 2” Washington design type is the 1912 perforated gauge 12, two of which are illustrated: one with nice centering, and one with the kind of centering often encountered on this issue.

Over many years of talking with collectors and Linn’s readers at shows and in stamp clubs, I’ve learned that very few actually get around to writing the letters, or emails, to me they would like to write. The result is that when a collector does send me a question or comment, he or she probably represents many others who may have the same question or concern. Because of this, I take reader correspondence seriously, and find that it often sparks new columns.

I recently received the following email related to United States stamps and expertizing: “I may have a 2¢ Washington (Scott 406) perf 12, with perf 11 on top, though I know none are known to exist.”

A normal Scott 406 is shown nearby, together with an example that is poorly centered. This is the first of the “2 cents 2” designs, perforated gauge 12, issued in 1912. It is Type I, an important point if there were any other perf 12s for this design, but 406 is the only perf 12.

So, what does this collector have? There are four possibilities: 1. It is genuine. 2. It is a misperf that has been altered. 3. It is an imperf Scott 409 altered. 4. It is a straight edge altered.

As I have written in previous columns, a totally new error coming to light after 100-plus years is at best improbable. It is not impossible, but the odds are astronomical. That said, I have not inspected the stamp under discussion here.

Some collectors seem to think that it is possible to expertize based on photocopies or computer scans. While these images can be helpful, nothing can substitute for seeing the genuine (even if faked) item. And no expertizer worth the name will issue a genuine certificate, or recommend that one be issued, based on an image of an item.

As for the four possibilities I mentioned, the bottom line for the first one, the idea that it is genuine, can be discounted to nearly zero.

The second possibility that it is a misperf that has been altered is based on the fact that almost half of the Scott 406 stamps that you will see are poorly centered, like the example shown nearby on the right.

The fourth possibility relies on the fact that these stamps were printed in sheets of 400 (two panes wide by two panes tall). The sheets were cut into four 100-stamp panes using printed lines through imperf margins between the panes as guides. That slitting process often missed the line, so that the resulting stamps could have a tall or a short straight edge.

Using a stamp with a tall straight edge (from the top of a bottom pane) eliminates the short/thin problem as the faker need only pick a stamp that has been cut from an adjoining pane with a little extra imperf margin.

The original stamp unseen, this seems like the most likely explanation to me. The only way to be certain is to submit the stamp for expertization, and perhaps the owner will do that.