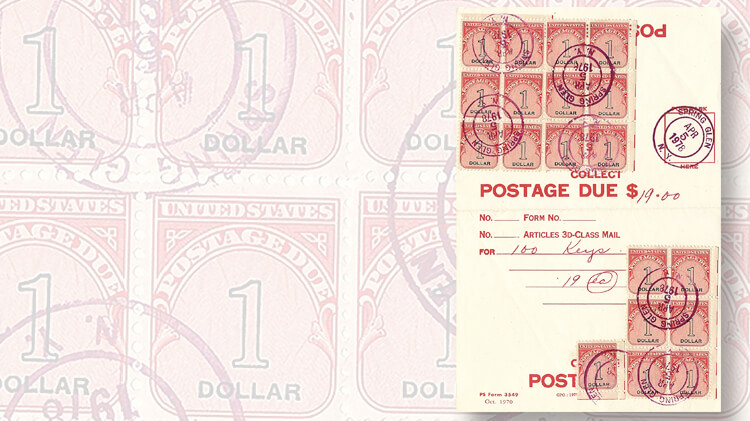 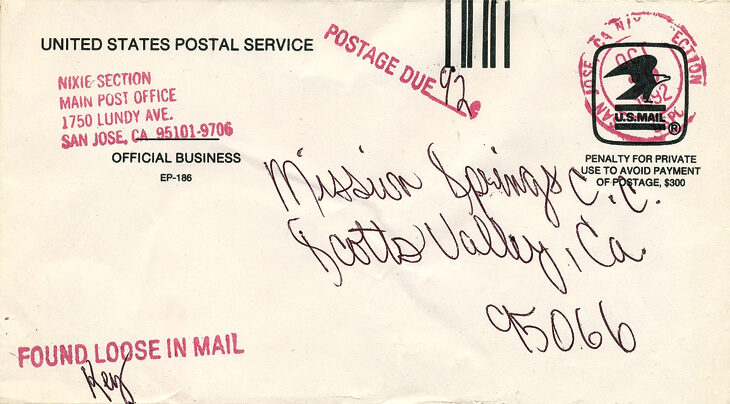 This October 1992 penalty envelope was used for the return of a loose key found in the mail. The key return fee was 92¢ at the time. No postage due stamps were used to indicate payment of the fee because the use of those stamps was discontinued on Oct. 2,
Previous
Next

The special “Key, I.D.” postal fee category was developed so that a lost room key from a hotel or other qualifying establishment could be returned to the business without prepayment.

Initially, it covered only hotel and steamship room keys bearing an attached tag and pledge to pay return postage. The charge was for each key returned, if multiple keys were returned.

At first, postage due stamps were affixed either to tags on the keys or to paper that was affixed to or wrapped around the keys, but eventually penalty covers were used to return them.

This special third-class “Key, I.D.” fee was established on June 28, 1926, and was a third-class fee service through Jan. 9, 1999. As of July 1, 1996, this third-class service, like all others, became part of the standard mail (A) classification. (For further details, see chapter 22 of the third edition of Updated United States Domestic Rates 1999-2011, by Wawrukiewicz and Beecher.)

With the newest rate changes, effective Jan. 10, 1999, it became a first-class service where a 30¢-per-piece fee was added.

Two ways in which this fee was paid are pictured here.

The first illustration shows an April 5, 1978, example of Form 3549, which was used to collect the fee for 100 returned keys, applying the 19¢-per-key fee of the time. I am guessing that there was a central location where a large number of keys for a hotel were returned. The 19 $1 postage due stamps (Scott J100) affixed to the form indicate payment of the due amount.

This form was used to collect postage due on multiple undeliverable second- and third-class items, including, as we can see, the return fee on multiple keys. I have an example of this form used for returning multiple third-class items dated Dec. 22, 1955. I am unable to find any earlier reference, although I do have a late reference of 1999.

This is a good time to mention an important resource recently made available on the U.S. Postal Bulletin website.

Before David Straight died in 2012, he and I developed an Excel spreadsheet file that lists more than 700 Post Office Dept. forms. In this file we describe the forms, give earliest known uses and latest known uses if available, and literature citations, also if available.

The second example shown, an October 1992 penalty envelope, returned a key at the 92¢ fee of the time. The key was “FOUND LOOSE IN MAIL,” according to the magenta handstamp at lower left on the envelope.

I believe that the postage due was collected, but no postage due stamp was placed to indicate this, because as of Oct. 2, 1986 (according to Postal Bulletin 21587), U.S. postage due stamps were discontinued. The envelope is wrinkled, consistent with it having carried an irregular-shape key.

In conclusion, any example of the “Key, I.D.” special fee is to be valued by the collector, because they are very uncommonly seen. Incidentally, the use of postage due stamps and the meanings of their various numerous uses are interesting phenomena. I am presently researching this issue and finding that the stamps’ use and the meaning of their use are quite variable, and therefore very intriguing.