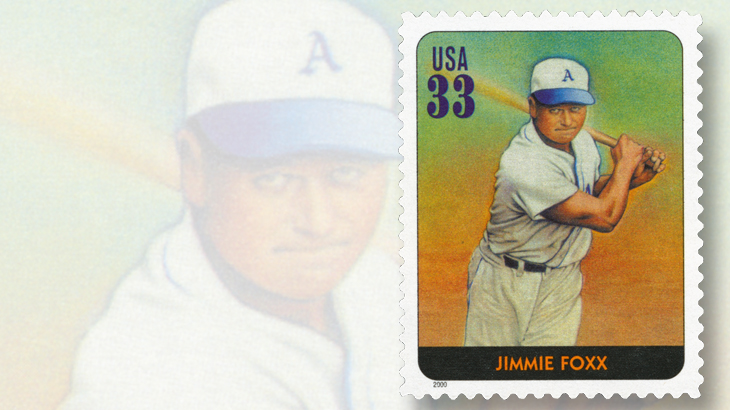 Baseball legend Jimmie Foxx was honored on a 33¢ stamp in a 2000 commemorative set,

Baseball hall-of-famer Jimmie Foxx was born Oct. 22, 1907, in Sudlersville, Md. A stand-out athlete in high school, he made his Major League debut with the Philadelphia Athletics at age 17 in May 1925.

After a brief stint in the Minor Leagues he became the regular first baseman for the Athletics and displayed his tremendous hitting power soon after.

In 1932 Fox hit his career-high 58 home runs in a single season, just short of the record of 60 set by Babe Ruth five years earlier. He was named the league’s Most Valuable Player twice before he was traded to the Boston Red Sox on Dec. 10, 1935.

Jimmie Foxx is honored on a 33¢ stamp in the Legends of Baseball set issued July 6, 2000 (Scott 3408n). The back side of the pane liner includes this biographical information:

“One of the top Major League Baseball sluggers of all time, Jimmie Foxx hit 30 or more home runs for 12 seasons in a row. Foxx won the Triple Crown for the Philadelphia Athletics in 1933, leading the American League in home runs, batting, and RBIs.”