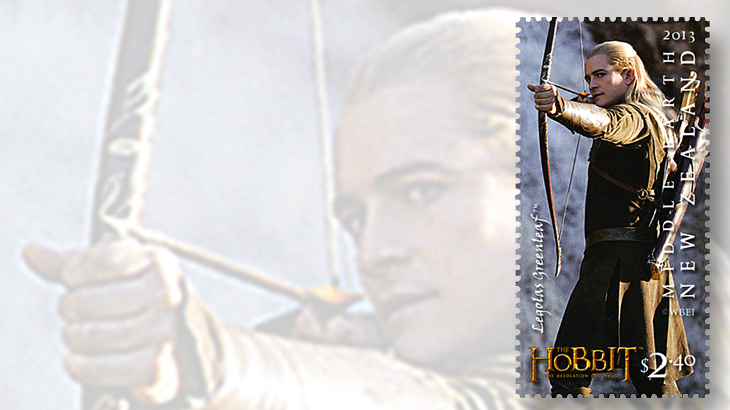 English actor Orlando Bloom is pictured in his role as Legolas from The Hobbit: The Desolation of Smaug, on a $2.40 stamp issued by New Zealand in 2013.

English actor Orlando Bloom celebrates his 40th birthday today. Born Jan. 13, 1977, in Canterbury, he studied drama at Fine Arts College Hampstead and Guildhall School of Music and Drama in London, graduating from the latter in 1999.

He was quickly hired by director Peter Jackson for the role of Legolas the elf, in Jackson’s three-film adaptation of J.R.R. Tolkien’s fantasy trilogy The Lord of the Rings, beginning with The Fellowship of the Ring in 2001, and returning in The Two Towers (2002) and The Return of the King (2003).

In 2003, Bloom began a second three-film sequence as mild-mannered blacksmith-turned-seaman Will Turner, starring alongside Johnny Depp and Keira Knightley in the first three Pirates of the Caribbean films. Bloom is returning to the franchise for the fifth film, Pirates of the Caribbean: Dead Men Tell No Tales, scheduled for release May 26.

Bloom has featured in numerous other films, including Elizabethtown and Kingdom of Heaven in 2005, and The Three Musketeers in 2011.