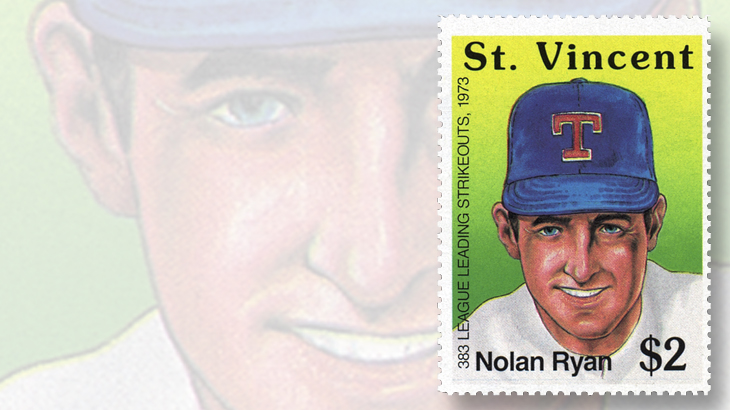 American baseball pitcher Nolan Ryan was honored on a set of stamps from St. Vincent in 1989.

A star pitcher in high school, Ryan was drafted by the New York Mets in 1965 and debuted for the Mets in 1966, but served in the Army Reserve during 1967. He was a relief pitcher for the “Amazin’ Mets” team that won the 1969 World Series, but he was traded to the California Angels before the start of the 1972 season.

Ryan got his chance as a starter with the Angels, and the fastballer established his reputation with the opportunity to pitch regularly. His pitches often topped 100 m.p.h., and in eight seasons he led the American League in strikeouts seven times. On May 15, 1973, he threw the first of his seven career major league no-hitters, a record that stands today.

He signed with the Houston Astros as a free agent in 1980, notching his 3,000th career strikeout that year, and in 1983 he became Major League Baseball’s all-time strikeout leader.

Ryan finished his playing career pitching five seasons with the Texas Rangers and throwing his last two no-hitters in 1990 and 1991. He retired at the end of the 1993 season at age 45, and was inducted into the National Baseball Hall of Fame in 1999.

After his baseball career, Ryan was president and, later, CEO of the Texas Rangers. He left the Rangers in 2013, accepting a position the next year as a special assistant to the Houston Astros owner.

The United States Postal Service generally does not honor living individuals, but Nolan Ryan has been featured on stamps from other countries, including a set of nine $2 stamps issued by St. Vincent on Nov. 30, 1989 (Scott 1276).