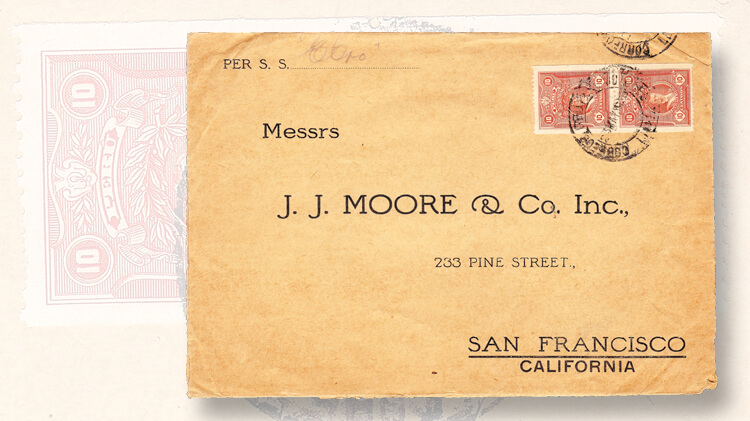 Used examples of the Peruvian coil stamps are scarce; this example shows a pair of the 10c coil stamps used to frank an envelope addressed to San Francisco, Calif. 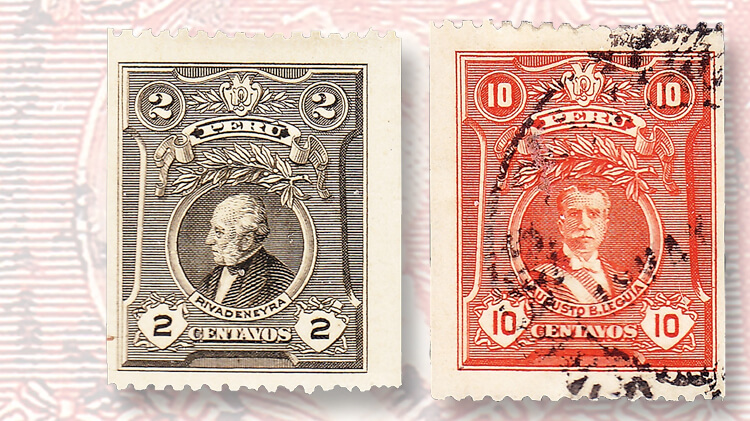 Peru’s first coil stamps used designs from the 1924 regular issues. The denominations paid the printed-matter rate of the Postal Union of the Americas and Spain (2 centavos) and the domestic and UPAE letter rate (10c).
Previous
Next

Once upon a time, a long time ago, Peru experimented with an issue of coil stamps. The year was 1928, and the issue was released in 1929. The stamps were printed by the American Bank Note Co., using two designs of Peru’s then-current series of definitive (regular-issue) stamps, which first appeared in 1924.

There were two denominations of the new coils: the 2-centavo Jose Tejada Rivadeneyra stamp (Scott 258), intended to pay the printed-matter rate for the Postal Union of the Americas and Spain (UPAE), and the 10c Augusto B. Leguia stamp (260), which paid the domestic and UPAE letter rate.

American Bank Note delivered the coil stamps in rolls of 500. The fact that the coil stamps were perforated gauge 14 horizontally while the sheet stamps from which they were made were perf 12 makes it easy to identify fake coils created from the perf 12 stamps.

The stamps were printed in sheets in the usual fashion, then cut into vertical strips of 10 that were pasted together to make up a roll. I have never seen a paste-up pair.

The stamps were intended to be sold from machines made by the Ticket Automatic Delivery Co. of Great Britain, but the machines never reached Peru. Some of the coil stamps did get used, but not many.

I have seen just two examples of the 10c stamp on cover; one is shown here. I purchased an example from a small auction more years ago than I care to remember. I knew at the time it was unusual, but I had no idea how scarce it was.

Given their scarcity, even loose examples of the coil stamps alone are not frequently seen. Recently, a 2c coil was offered for a reasonable price on the eBay online commerce website, but found no takers — a matter of supply and demand.

Anyone looking for a new country to collect should consider Peru. The stamps are attractive and a number of them are surprisingly scarce, but with few people chasing them, the prices (with the exception of a few high-profile classics) are within everyone’s reach.

Best of all, there is an active and productive club led by Henry Marquez and Chuck Wooster, with a fine website at www.peru-philatelic-study-circle.com. The club celebrated its 10th anniversary at World Stamp Show-New York 2016.

Check out the club’s web page. You will be astonished by what you find there, including seven presentations suitable for club use.

In the members-only section are no fewer than 45 award-winning exhibits, as well as an array of government documents and philatelic literature.