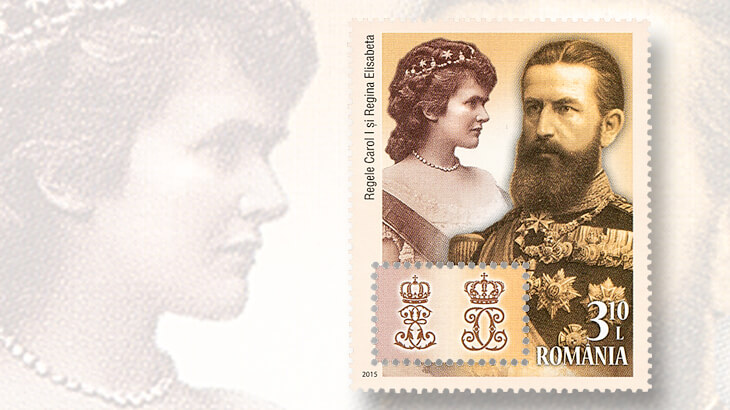 A 2015 Romanian 3.10-lei King Carol I, Queen Elisabeth and Monograms stamp (Scott 5650). The stamp is from a set four honoring Romanian royalty. 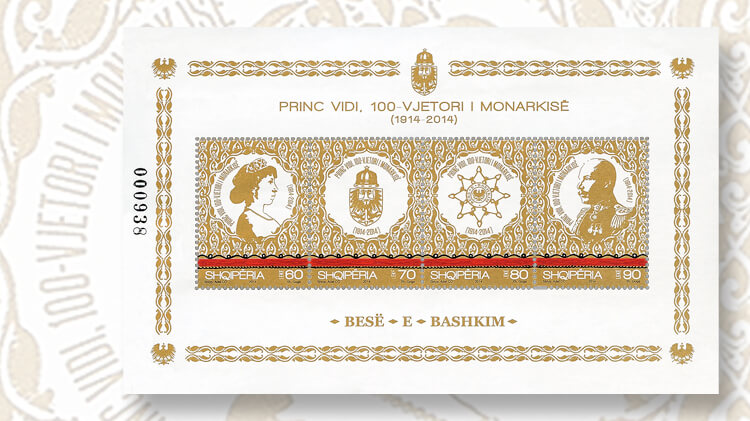 This 2014 Albanian miniature sheet of four celebrates the centennial of the coronation of Prince Vidi I (Scott 2959). 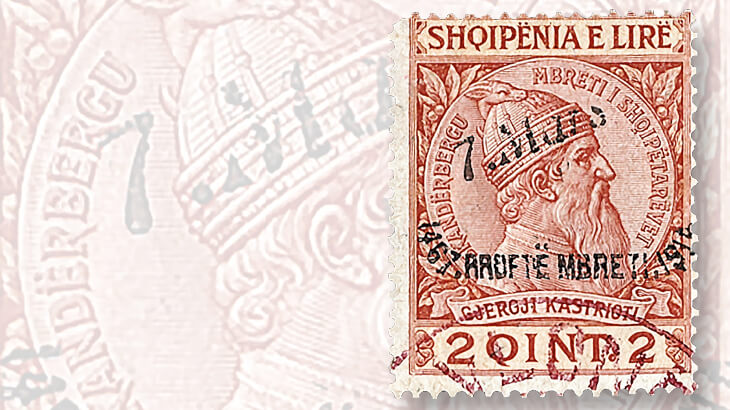 An Albanian 2-qintar Skanderbeg stamp overprinted “7 Mars 1914” to commemorate the arrival of Prince Wilhelm of Wied in Albania (Scott 41). 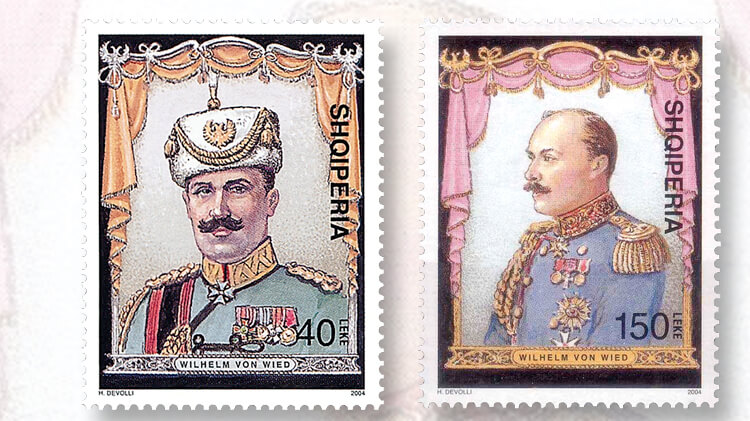 In 2004, Albania issued two stamps to honor the 90th anniversary of the appointment of Prince Wilhelm zu Wied as ruler of Albania (Scott 2740-2741). 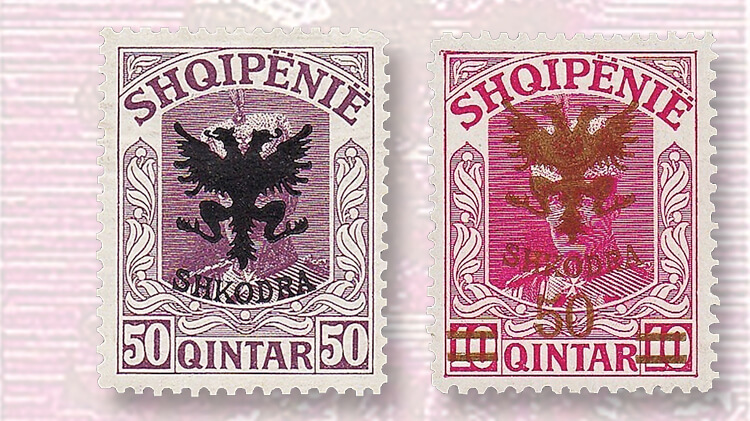 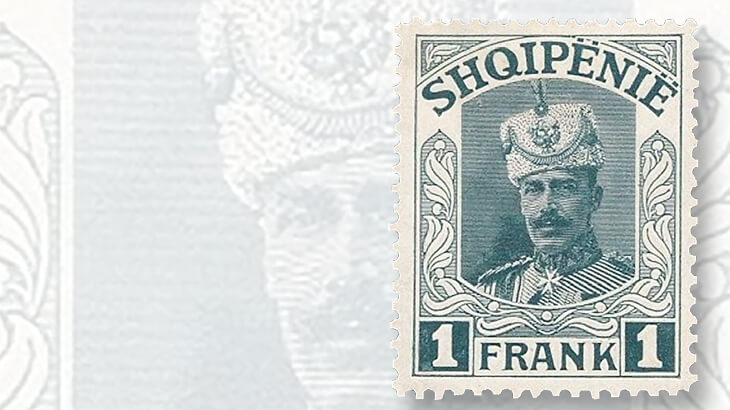 An unissued Albanian 1-frank Prince Vidi I stamp, from a set of seven prepared in 1914 but not issued.
Previous
Next

Although he reigned as Prince Vidi I of Albania for just a few months, from March 7, to Sept. 3, 1914, Prince Wilhelm zu Wied left a lasting impression on Albanian stamps.

Wilhelm was born March 26, 1876, in Nuwied Castle, near Koblenz, in the Prussian Rhineland. He was the third son of Wilhelm V, Prince of Wied.

His father was the brother of Queen Elisabeth of Romania, and his mother was the sister of Queen Louise of Sweden. He was also closely related to the ruling families of Prussia and the Netherlands.

Albania, the last country in Europe ruled by the Ottoman Empire, became independent in 1912. Its independence came not from emerging Albanian nationalism but from the Great Powers’ desire to detach Albania from the Ottomans and their failure to agree on who should receive it.

The Austrians sought mainly to deprive the Serbians of it. The Italians wanted it for themselves and feared that Austria would get it. The Greeks wanted to extend their border north. Russia, France, and Great Britain were too far away to covet it directly.

The Albanians were the only Christian people of Europe to convert to Islam in large numbers after being conquered by the Turks. They served the Ottomans well as soldiers and administrators.

In clashes between the Ottomans and the emerging Greek and Slavic nations around them, the Albanians came down firmly and enthusiastically on the side of the Sublime Porte (the central government of the Ottoman Empire).

After long years of Ottoman rule, Albania was unquestionably the most backward and least developed nation in Europe. Loyalties were tribal and familial, and the leading cause of death among adult males was the blood feud.

There was also an ethnic and cultural divide between the Ghegs in the north and the Tosks in the south. Most of the population were rural peasants, with 40 percent of them owning no land of their own.

Having most untimely removed Albania from the Ottomans’ grasp, the Great Powers besought someone to hand the country to. It was at this point that Queen Elisabeth, consort of King Carol I of Romania, thought of her nephew, Wilhelm.

At the time, the 37-year-old Wilhelm was a captain in the German general staff. As a German Lutheran, he was neither Gheg nor Tosk, Sunni nor Shiite, Orthodox nor Roman Catholic, and would presumably be able to deal equitably with all elements of the Albanian population.

In November 1913, the Great Powers persuaded Wilhelm, despite his grave misgivings, to accept the throne, and the Albanian provisional government to accept him as Prince of Albania.

A brave, blunt, and honest soldier with a refined sense of honor and duty, Wilhelm was ill-equipped to deal with the maelstrom of conflicting interests, opportunists, scallywags, and schemers who would beset him in Albania.

Wilhelm arrived March 7, 1914, in Durres, then the capital of Albania, and was duly coronated with appropriate pomp and circumstance.

A set of six Albanian Skanderbeg stamps was overprinted with the date to commemorate the arrival of the prince (Scott 41-46). The typographed stamps are perforated gauge 14. The 2-qintar stamp from the set is shown nearby.

Not long after, a very attractive set of seven engraved Prince Vidi I stamps was produced. The stamps, perforated gauge 12½ and all with the same design but in different colors, were denominated 1q, 5q, 10q, 20q, 25q, 50q and 1 frank. The 1fr stamp from the set is pictured here.

Alas, Wilhelm‘s time on the throne did not last long enough for these stamps to be issued.

Some of the unissued stamps made their way into the philatelic market. They are not listed in the 2017 Scott Classic Specialized Catalogue of Stamps of Covers 1840-1940, but the set of seven stamps in unused hinged condition sells for about $30.

Rival tribal leaders and Greek and Italian agents used force and bribery to undercut each other and Wilhelm.

At one point, Wilhelm placed a battery of artillery in the palace garden and fired canon into the residence of his own minister of war and interior, after discovering that he was secretly in the employ of Italy. Greece used the chaos as an excuse to occupy the southern part of the country.

With the outbreak of World War I in August 1914, the Great Powers withdrew their token force of troops; and the Dutch gendarmerie, on which Wilhelm had depended to defend the palace, was recalled to the Netherlands. Wilhelm had no choice but to flee the country, which he did on Sept. 3, 1914.

Although he was no longer in residence, Wilhelm did not abdicate the throne. Albania technically remained a monarchy with him as its head of state until it was declared to be a republic on Jan. 1, 1925.

Meanwhile, the remaining stocks of the Prince Vidi I stamps did not go to waste.

In 1920, all but the 5q and 1fr stamps were overprinted “Shkodra” with the double-headed eagle national symbol of Albania obliterating Wilhelm’s visage (Scott 120-124). Shkodra (also spelled Shkoder) is a city in northwestern Albania.

When he left Albania, Wilhelm went to Romania. Had he stayed there and served with the Romanians when they joined the Allies, he might well have been able to reclaim his throne after the war. But his sympathies for Germany were too strong.

Receiving a commission in the German army under the nom de guerre “Count of Kruja,” he served on the Western Front until the German surrender. After the war, Wilhelm retired to Sinaia, Romania, where he lived until his death on April 18, 1945.

After World War II, Albania entered a long, dark night of Communist tyranny, not emerging until the general collapse of European Communism in 1991. When the Albanians cast about to recover their pre-Communist history and culture, they rediscovered Wilhelm.

On Aug 30, 2004, Albania issued a set of two 90th Anniversary of Prince Wilhelm zu Wied Appointed Ruler of Albania stamps (Scott 2740-2741). Pictured nearby, the stamps, denominated 40 leks and 150 leks with designs based on official portraits, were printed by lithography and perforated gauge 13½.

Ten years later, on Dec. 19, 2014, Albania issued a miniature sheet of four stamps, shown here, to commemorate the 100th anniversary of the coronation of Prince Vidi I (Scott 2959).

The 60-lek stamp depicts Princess Sophie, Wilhelm’s wife. The 70-lek stamp shows the crown and arms of Albania. The design of the 80-lek stamp features an Albania double-headed eagle inside an eight-pointed star. The high-denomination 90-lek stamp shows Prince Wilhelm. The stamps in the lithographed sheet are perforated gauge 13¼ by 13.