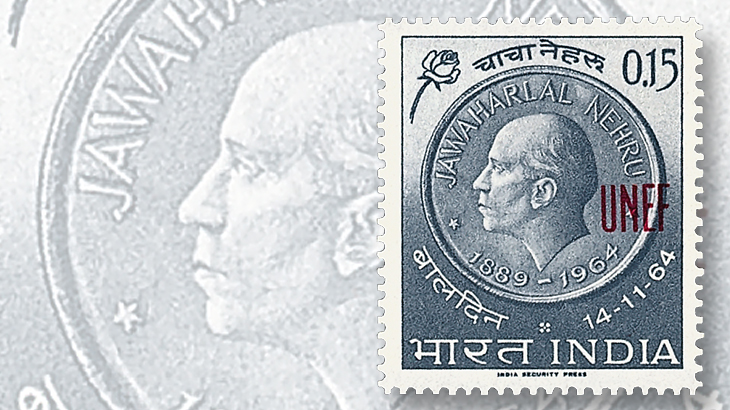 The 1965 India 15-paise Nehru Medal and Rose stamp overprinted “UNEF” for use as military stamp by Indian peacekeepers in Gaza (Scott M62) is a very good buy in used condition at the 2017 Scott Standard Postage Stamp Catalogue value of $8.

Because Indians are becoming more affluent with more disposable income, stamp collecting is enjoying an increase in popularity there as well as among the Indian diaspora. Dealers have been buying stocks of Indian stamps in Europe and the United States for sale in India.

Gaza is a strip of territory along the coast of the Eastern Mediterranean bordered by the Egyptian Sinai to the west and Israel to the east. The population of Gaza is uniformly Arab and Muslim.

Gaza was part of the British Mandate Territory of Palestine until the 1948 war of Israeli independence. After the creation of Israel, Gaza was occupied by Egypt from 1948 until the Six-Day War in 1967.

After the Suez Crisis in 1957, United Nations peacekeepers, known as the United Nations Emergency Force (UNEF), were sent to the Sinai Peninsula and Gaza.

The U.S. peacekeepers remained in place until they were hastily withdrawn at the outbreak of the Six-Day War in 1967.

India contributed military personnel to UNEF from its inception until its withdrawal in 1967. Over 11 years, more than 13,000 Indian troops served in the peacekeeping force in Gaza.

On Jan. 15, 1965, India overprinted “UNEF” on 15-paise Nehru Medal and Rose stamps for use as military stamps by Indian peacekeepers in Gaza (Scott M62).

The 2017 Scott Standard Postage Stamp Catalogue values the military stamp at $4 in mint never-hinged condition and at $8 in used condition, with the value for a used stamp in italics.

Supplies of the mint stamp are sufficient to current demand, but used examples are difficult to find.

If you come across a used example of the military stamp, it is a very good buy at Scott catalog value. On cover examples are a good buy at up to $20.