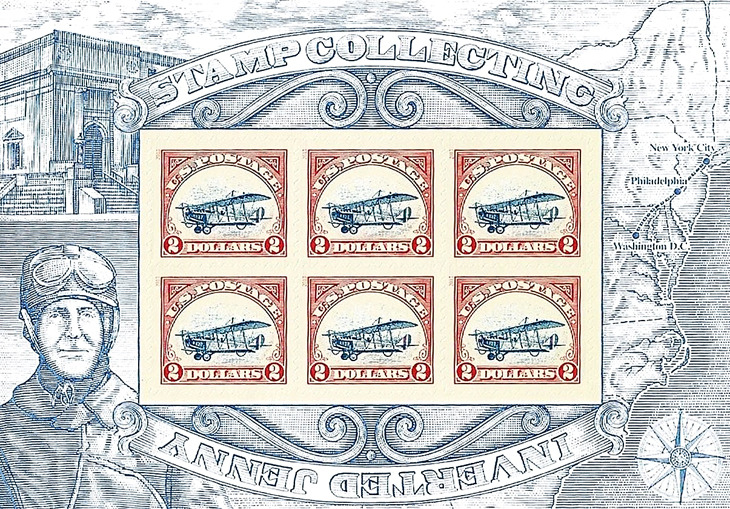 Jon Krulla’s pane of the rare upright Jenny Invert stamp was an unintentionally well-kept secret. He found the pane quite a while ago, but just recently reached Linn’s editors with news of his find.

Jon Krulla has been telling people that he found one of the rare Jenny Invert upright panes, but it seems like no one was paying attention.

An early effort to contact Linn’s Stamp News resulted in a miscommunication, and Krulla, a collector and stamp dealer, just put the pane of six stamps back in his collection.

“I briefly mentioned having this special sheet in my Linn’s stamp ads,” Krulla said, “but almost no one asked me about it, to my surprise.”

A second effort to reach the Linn’s editors was more successful, and Krulla supplied the image of the pane pictured here, along with details of his find.

Krulla’s pane is one of only 100 panes of six $2 stamps showing the blue Jenny biplane flying right side up. Most of the $2 Jenny Invert stamps issued in 2013 show the plane upside down (Scott 4806), a tribute to the original 1918 24¢ Jenny Invert (C3a) that is today one of the world’s most famous stamp errors.

The 2013 upright variety was created intentionally by the United States Postal Service as a marketing scheme. All of the $2 Jenny Invert stamps were sealed inside blind packaging.

The stamps are still on sale, but few post offices still carry them. They were taken off sale at USPS Stamp Fulfillment Services more than a year ago as inventory depleted.

“I still have some of the normal inverted Jenny sheetlets left,” Krulla told Linn’s.

He estimates he spent more than $1,000 buying the six-stamp panes, because he could use up the $2 stamps as postage, mailing packages to customers.

He’s the author and publisher of The Little Girl Who Missed the Train, published under the pen name Ole Romer. He uses stamps to mail out orders for the 384-page novel that combines the story of Germany’s rare Vineta provisional stamp with the rescue of a family’s sole survivor from Nazi Germany. He uses Linn’s classified ads to offer his book under the Philatelic Literature heading.

The Danish-born Krulla, a retired New York City high school teacher, came to the United States with his family, after first emigrating from Austria to Canada after the end of World War II.

He now divides his time between Brooklyn, N.Y., and a 60-acre farm in upstate New York in the western Catskills mountains near the Pennsylvania border.

He bought all of his $2 Jenny Invert stamps “at one or two of the small local post offices” near his farm, in Downsville and Roscoe, N.Y.

He believes he purchased the upright variety one or two summers ago, and has kept it in his collection ever since.

It wasn’t until he corresponded with a Linn’s editor in January that he realized that the filler card that came with his upright variety of the Jenny Inverts also included information about registering his find with the Postal Service.