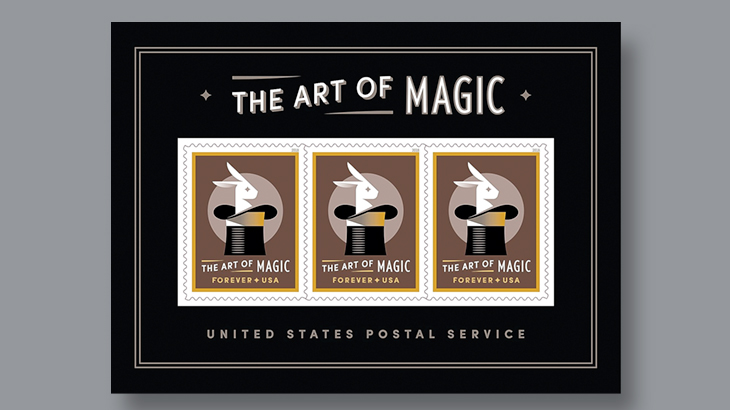 Like magic, the rabbit appears and disappears on this souvenir sheet to be issued Aug. 7. The stamps are printed with a transparent lenticular overlay. 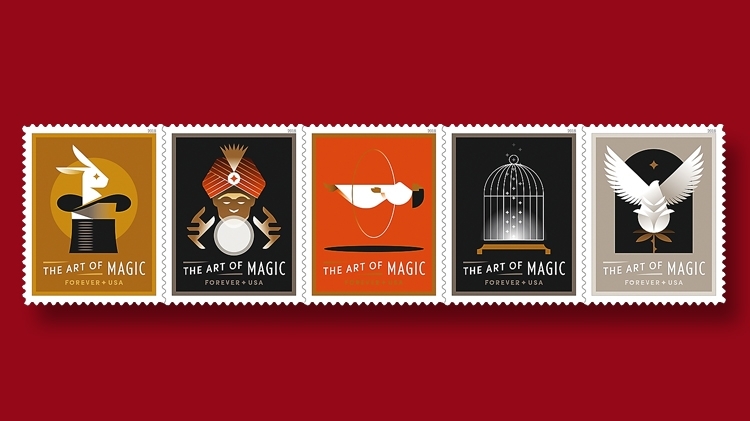 The souvenir sheet of three stamps will be issued alongside this set of five in an Aug. 7 ceremony in Las Vegas. The Rabbit in a Hat stamp in the set of five does not have the lenticular effect.
Previous
Next

The United States Postal Service is now pulling rabbits out of a hat.

The postal agency revealed Aug. 1 that it will issue a three-stamp souvenir sheet with a lenticular motion effect in association with its upcoming five-stamp set named The Art of Magic.

“The Art of Magic souvenir sheet will feature three identical stamps that show a white rabbit in a black hat. By rotating each stamp, you can see the rabbit ‘pop’ out of the hat,” the Postal Service reports.

The three newly announced Rabbit in a Hat stamps with lenticular effect are nondenominated (50¢) forever stamps, as are the five stamps in the set printed in panes of 20.

The Rabbit in a Hat stamp in the pane of 20 does not have the lenticular effect, the Postal Service notes.

The announcement of the souvenir sheet comes less than a week before the stamps are scheduled to be issued in a Las Vegas first-day ceremony, on Aug. 7.

The Art of Magic pane of 20 in five designs should be available in most U.S. post offices, but not the three-stamp souvenir sheet.

“The souvenir sheet will only be available for purchase online at usps.com, mail order through USA Philatelic, and by toll-free phone order at 1-800-STAMP-24,” according to the Postal Service.

The souvenir sheet will feature the first U.S. stamps to employ lenticular printing, which conveys movement in a still picture by applying a transparent ridged plastic overlay that alters a viewer’s perception of the scene when the stamp is rotated slightly.

The U.S. Postal Service has previously affixed holograms to high denomination stamps to convey the effect of a 3-D image, including four stamps in the 2000 Space souvenir sheets set (Scott 3411-3413).