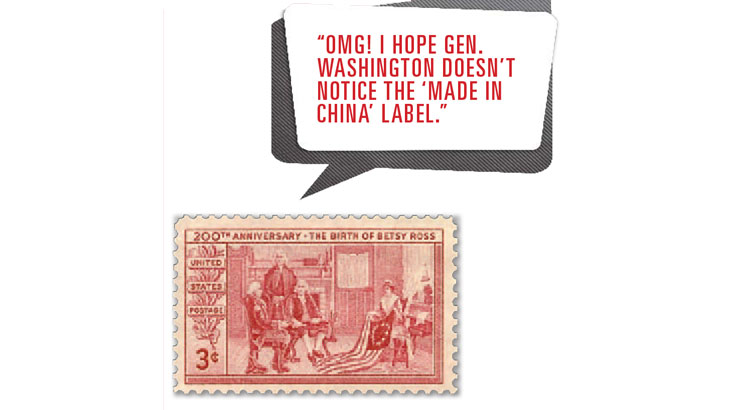 The October cartoon caption contest featured the 1952 3¢ Betsy Ross stamp. The winner of the nonphilatelic part of the contest is Gilbert Schaye of New York, who brought the flag presentation shown on the stamp into the modern era. The next cartoon captio

The fact that the Betsy Ross legend has little to do with reality inspired several entries in the October cartoon caption contest featuring the 1953 3¢ commemorative showing Ross presenting her flag to the committee headed by George Washington.

Lawrence Segel of White Plains, N.Y., represents this group of entries with “Now we know where ‘Fake News’ originated!!”

I suppose it was inevitable that another group of entries would play off the fate of many new ideas where the public reaction is key. George Dodson Sr. from Philadelphia, Pa., was the first entry to use “I say, run it up the flag pole and see if anyone salutes.”

The stars in the blue field of the flag are taken as a given by most of us, but some of the entrants thought out of the box. Among these was “Heavens to Betsy! I thought my profile was going to be where those stars are!” by Bill Hoisington of River Forest, Ill.

Gilbert Schaye of New York, N.Y., wins the nonphilatelic line of this contest. His line, shown above, mentions something that certainly wasn’t a contemporary problem, but is a concern these days.

The philatelic side of the contest was won by Glenn Guttman, whose entry came by email. Again, his entry predicts developments that would come much later with “Betsy, can you move it along — The post office wants to get started on its Flag Stamp program!”

Steve Cole of Dove Creek, Colo., has Betsy thinking, “I hope this country can get rid of some of this bureaucracy! A flag committee, and I do all the work!”

“Tell Ben I’ll have his socks darned by Tuesday,” from Tom Williams of Terlingua, Texas.

“Also, Mr. President, I made it fireproof, just in case protesters try to burn it,” from Laura and Tom Tomaszek of Cedar Rapids, Iowa.

“Martha and I would be pleased to be the first competitors on ‘Dancing with the Stars and Stripes!’ ” from Steve Kotler of San Francisco, California.

“General, please tell Mrs. Washington that this can only be washed in cold water without bleach or harsh detergents,” from David Saks by email.

The next cartoon caption contest will be announced in the Dec. 10 Linn’s.