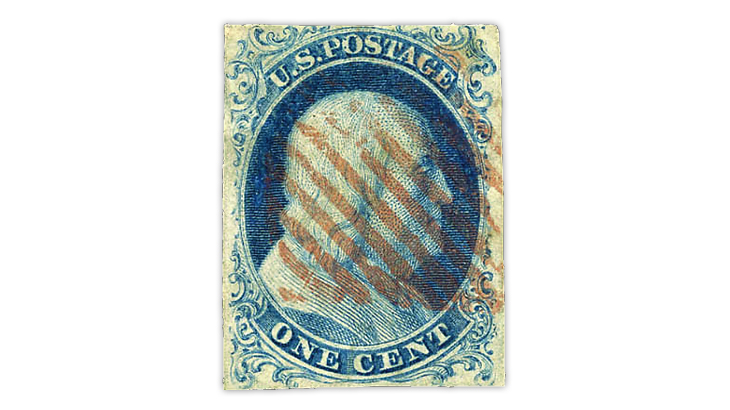 A used example of the rare U.S. 1¢ blue type I of 1851 will be auctioned in Boston by Matthew Bennett.

The May 18 public auction by Matthew Bennett International will feature a used example of the United States 1851 1¢ blue Benjamin Franklin type I stamp from position 7R1E (Scott 5).

The rarity is described as having balanced margins barely touching in a couple of spots, but with all type characteristics completely visible. It is struck with a “neat red N.Y. square grid cancel.” Bennett describes it as one of the finer of the 100 or so known examples.

The stamp is accompanied by a 1995 Philatelic Foundation certificate.

In the 2019 Scott Specialized Catalogue of United States Stamps and Covers, the used stamp is listed with a $65,000 value in italics, indicating that it can be difficult to value accurately. A red grid cancel is a value-added characteristic, according to the Scott listing.

More than 40 lots of China ranging from issues of the empire to the People’s Republic are also offered in this sale, as are various U.S. and worldwide collections.