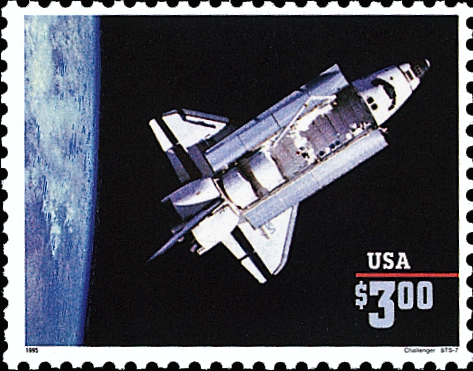 Michael J. Smith, who piloted the final flight of the space shuttle Challenger, was born April 30, 1945.

Michael J. Smith, born April 30, 1945, was never directly commemorated on a United States stamp, but a 1995 $3 stamp showing the space shuttle Challenger was an unstated tribute to Smith, who piloted the Challenger on its final mission, and the six other crew members aboard the shuttle on Jan. 28, 1986.

Smith, born in Beaufort, N.C., graduated from the U.S. Naval Academy in 1967 and completed Navy aviation jet training in 1999. Initially serving as a flight instructor, he was a combat pilot during the Vietnam War, and completed U.S. Navy Test Pilot School in 1974. That led to his selection as a NASA astronaut candidate in May 1980 and his assignment as pilot of the 1986 Challenger mission, his first mission in space.

Smith is buried at Arlington National Cemetery in Virginia. He was posthumously awarded the Congressional Space Medal of Honor.

The $3 Space Shuttle stamp (Scott 2544) is inscribed "Challenger STS-7" to honor the 1983 mission that carried the first American woman into space, astronaut Sally Ride (1951-2012), but U.S. Postal Service officials have acknowledged that the stamp also honors those who perished on the final Challenger flight.