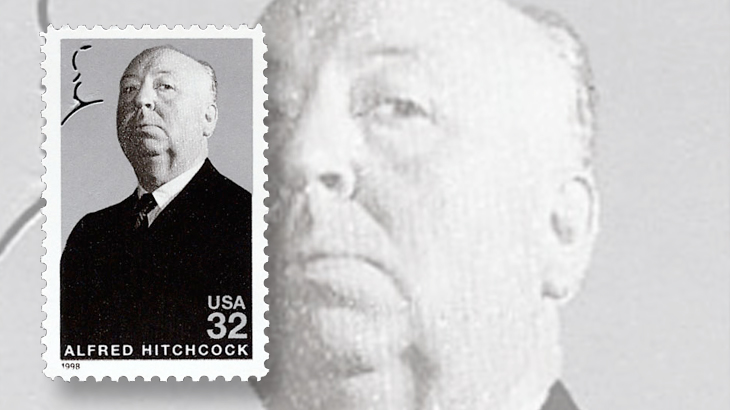 The master of suspense, film director Alfred Hitchcock, on a 32¢ Legends of Hollywood stamp issued in 1998.

Film director and producer Alfred Hitchcock was born in Leytonstone, England, on Aug. 13, 1899. He studied to be a draftsman, but his artistic talent and interest in photography brought him to the film industry, where he began working for Paramount in England as a title-card designer for silent movies.

He was soon more deeply involved in film production and was named director of The Pleasure Garden in 1925.

Hitchcock married Alma Reville in 1927; their daughter and only child, Patricia, was born the next year.

His 1940 movie Rebecca received the Academy Award for best picture. He directed more than 50 films during a career that spanned six decades.

Hitchcock was an innovative and stylish director whose techniques set new standards for filmmakers. After moving to the United States in 1939, he became an American citizen in 1955, and was knighted by Queen Elizabeth II in 1980.