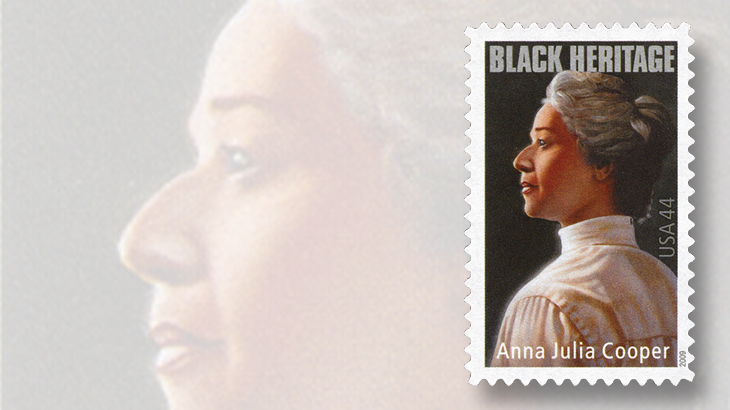 An activist for civil rights and education, Anna Julia Cooper is honored on a 44¢ stamp from 2009.

On the back of the release paper for each self-adhesive stamp is printed: “Anna Julia Cooper (c. 1858-1964) was an educator, author, and activist who challenged biased notions of racial and gender inferiority. Cooper fought for social justice and civil rights for African-American women, young people, and the poor through her scholarship, community outreach, and innovative educational leadership.”

Cooper was born into slavery, but in 1887 she earned a master’s degree in mathematics from Oberlin College following the 1879 death of George Cooper, her husband of two years.

Many years later, she would complete her university studies by earning a doctorate at the University of Paris, Sorbonne, in 1925. Her thesis, on the subject of slavery, was written in French.

In 1892 she published a collection of essays, A Voice from the South by a Black Woman of the South. After teaching for several years, Cooper became a public speaker and essayist, and spoke on “The Negro Problem in America” at the 1900 First Pan-African Conference in London.

During the 1930s she served as president of Frelinghuysen University in Washington, D.C.