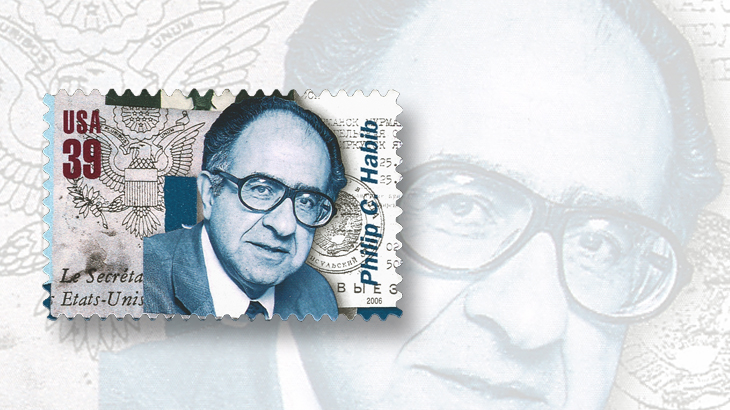 Philip C. Habib was honored on a 39¢ stamp in the 2006 Distinguished American Diplomats set.

Habib was born Feb. 25, 1920, in Brooklyn, N.Y., and studied forestry at the University of Idaho, graduating in 1942. He served in the U.S. Army during World War II, and earned his Ph.D. in economics from the University of California, Berkeley.

Habib entered the U.S. foreign service in 1949. After serving in a number of diplomatic posts around the world, he joined the American delegation in Paris at the Vietnam peace talks in 1968. He later served as ambassador to South Korea, but retired for health reasons in 1978.

Three years later, President Ronald Reagan chose Habib as his envoy to the Middle East, where the career diplomat successfully negotiated an end to hostile military activities in the region. He later served as special envoy to Central America.

Habib was awarded the Presidential Medal of Freedom in 1982, and was honored by France with its National Order of the Legion of Honor in 1988.

Among his admirers was American singer-songwriter Warren Zevon, whose 1982 song The Envoy was inspired by Habib’s success at shuttle diplomacy.