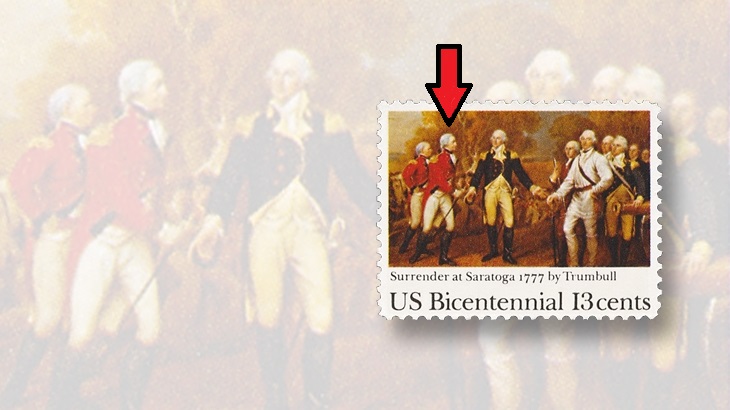 British Gen. John Burgoyne surrenders his sword to American Gen. Horatio Gates on this 13¢ stamp from 1977.

British military leader Gen. John Burgoyne, whose initial successes against colonial forces in America led to his later defeat in 1777, was born Feb. 24, 1722.

Writing for the Mount Vernon Ladies’ Association, Nicholas C. Holy of George Washington University noted that during his youth, “Burgoyne developed a love of wine, a keen eye for fashion, the boldness of a gambler, an insatiable quest for fame, and the reputation of a ladies’ man.”

Burgoyne left a military career behind in 1751 and moved with his wife to France, but joined the 11th Dragoons in 1754 following the outbreak of the Seven Years’ War.

During the American Revolution, Burgoyne successfully drove the Continental Army from Quebec. He commanded forces that occupied Fort Ticonderoga in 1777, but his army was defeated at Saratoga in New York by Continental Army forces led by Gen. Horatio Gates and Gen. Benedict Arnold. The American victory is considered an important turning point in the war for independence.

In his later years, Burgoyne found some success as a writer of light comedic plays, including The Heiress in 1786. He died Aug. 4, 1792.

Details of John Trumbull’s painting Surrender of General Burgoyne, which hangs in the rotunda of the U.S. Capitol, have been featured on multiple U.S. stamps, beginning with a 2¢ carmine-rose commemorative issued Aug. 3, 1927 (Scott 644). The painting is shown in full color on a 13¢ stamp issued Oct. 7, 1977 (1728), and engraved in blue on a $1 stamp issued May 5, 1994 (2590). In the painting, Burgoyne is a central figure, shown surrendering his sword to Gates.