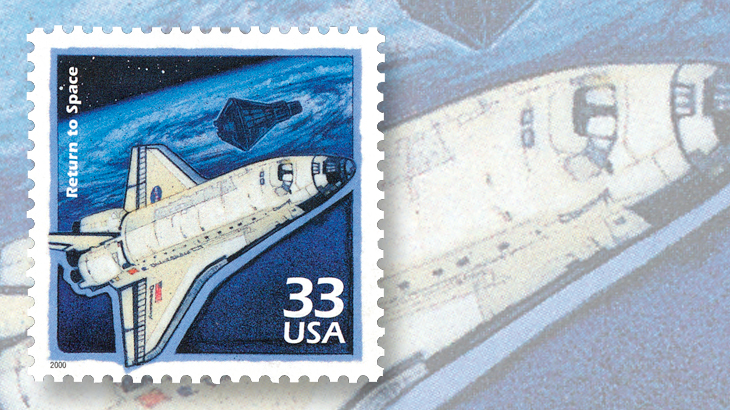 John Glenn has journeyed twice into space, and United States stamps have commemorated each time he did.

Former astronaut and U.S. Senator John Herschel Glenn Jr. turns 94 this week. He is one of the few living Americans to see his accomplishments commemorated on a United States stamp — and it's happened twice in his lifetime.

In 1959 Glenn was chosen for the Project Mercury spaceflight program, and became the first American to orbit the Earth on Feb. 20, 1962.

After resigning from NASA in 1964, Glenn worked in business for 10 years before successfully running for a U.S. Senate seat from Ohio. He served four consecutive six-year terms, retiring in 1998.

While still a U.S. Senator, however, Glenn trained as a payload specialist for a mission on the space shuttle Discovery, which went into space on Oct. 29, 1998. It was his second spaceflight, and at age 77, he became the oldest person to travel into space.

A 33¢ stamp issued May 2, 2000, in the Celebrate the Century series (Scott 3191h) honored this feat, with the theme "Return to Space." The front of the stamp pictures the Discovery in orbit. The reverse reads: "In 1962, aboard the Mercury Friendship 7, John Glenn became the first American to orbit the Earth. His 1998 return to space at age 77, on the shuttle Discovery, heightened interest in the space program."