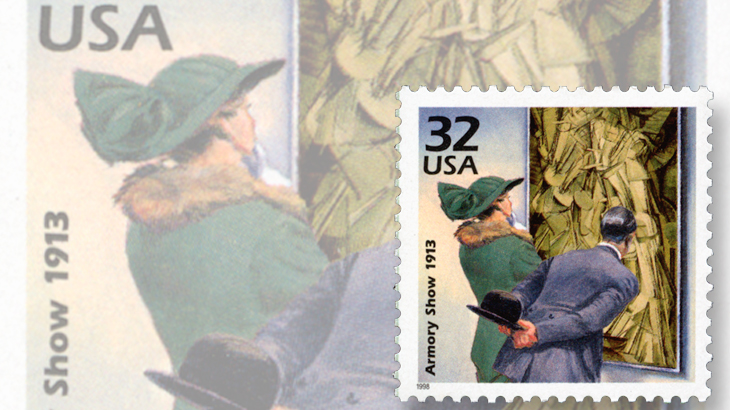 Marcel Duchamp was born July 28, 1887, in Blainville-Crevon, France, near Rouen in Normandy.

Often described as one of the most important artists of the 20th century, Duchamp's best-known work is an early painting, Nude Descending a Staircase No. 2, completed in 1912 and exhibited at the Armory Show, a name given to the 1913 International Exhibition of Modern Art first shown at the 69th Regiment Armory in New York City, and later in Chicago and in Boston.

In 1998, the Celebrate the Century set of 15 32¢ stamps commemorating the 1910s included one stamp titled Armory Show 1913 (Scott 3183d). The stamp illustration depicts a woman and a man at the show, carefully observing Duchamp's painting. On the reverse of the stamp is this inscription:

"The 1913 Armory Show introduced avant-garde art to this country. The highly controversial exhibition included Marcel Duchamp's Nude Descending a Staircase, No. 2 that now hangs at the Philadelphia Museum of Art."

In 2013, the United States Postal Service paid a more direct tribute to Duchamp's Nude Descending a Staircase, No. 2 by showing the complete painting on a stamp of its own, as one of the 12 paintings featured on forever stamps in the Modern Art in America set (Scott 4748k).

Duchamp moved to the United States in 1915 and was instrumental in development of the Dada art movement around the same time. He also created art from found objects, described as "Readymades." Dividing his time between France and the United States, he became an American citizen in 1955 and died in France in 1968.