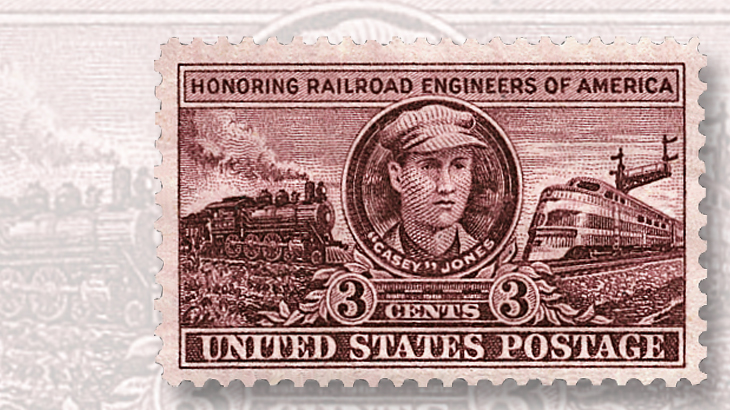 The 1950 3¢ stamp honoring Casey Jones is dedicated to the railroad engineers of America.

The story of railroad engineer Casey Jones might seem like a folk legend, but Johnathan Luther “Casey” Jones was very real indeed.

Born in Missouri on March 14, 1863, Jones was still a child when he moved with his family to Cayce in western Kentucky, and the town would become the basis for his nickname.

Jones married Janie Brady in 1886, and they raised a family with three children in Jackson, Tenn. Jones worked for the Mobile & Ohio Railroad and was hired by the Illinois Central Railroad, promoted to engineer in 1891.

On April 30, 1900, Jones was engineer of the Illinois Central “Cannonball” carrying passengers and mail from Memphis, Tenn., to Canton, Miss. As the speeding train approached Vaughan, Miss., in Yazoo County, fireman Simeon T. Webb spotted the last cars of another train up ahead on the main line. A freight train on the passing track was blocked in by another train, leaving its last few cars still on the track of Jones’ approaching train.

Webb yelled a warning to Jones, who tried to brake his own train while blowing the whistle to alert the train ahead. He was able to slow the train enough to save his passengers and crew, but he lost his own life, the only fatality in the terrible collision.

His heroic effort and sacrifice were preserved in history with a song that apparently had its start when a railroad engine wiper named Wallace Saunders sang about his late friend during train runs after the accident.

The Ballad of Casey Jones was later recorded and performed by numerous folk musicians and vaudeville performers.

Fifty years after the tragedy, a 3¢ stamp honoring railroad engineers of America was issued on April 29, 1950, with a portrait of the real Casey Jones in the center of the stamp (Scott 993).