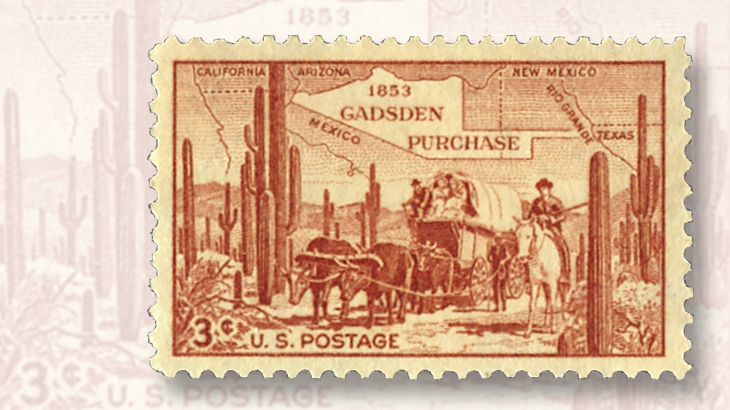 James Gadsden was instrumental in the completion of the Gadsden Purchase, commemorated on a 3¢ stamp in 1953.

The namesake of the treaty between the United States and Mexico was James Gadsden, the American ambassador to Mexico in 1853, who successfully negotiated the purchase of lands that today make up the southern regions of Arizona and New Mexico.

Gadsden was born May 15, 1788, in Charleston, S.C., and graduated from Yale in 1806. He joined the U.S. Army and served in the War of 1812. He later was elected to the Florida Territory legislature and became president of the South Carolina Railroad Co.

Gadsden was named the American minister to Mexico in 1853 and was directed to obtain more land from Mexico and establish a clearly identified border between the two nations. Plans called for a new railroad line on the U.S. side of the border, but that never materialized. The purchase, signed by Gadsden and Mexican president General Antonio Lopez de Santa Anna, obtained 29,670 square miles for the United States at a cost of $10 million.