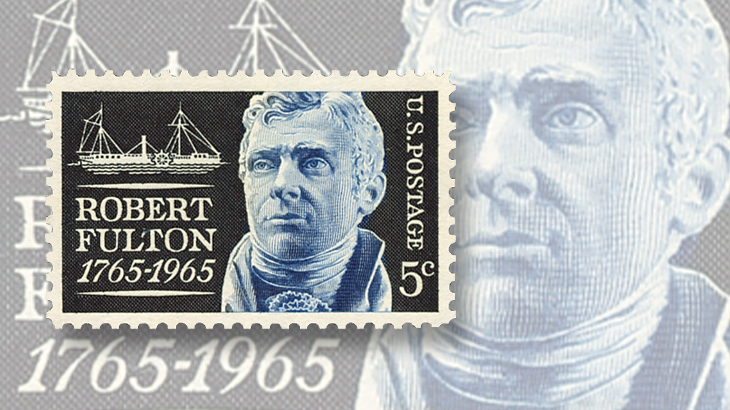 The 5¢ Robert Fulton commemorative stamp was issued Aug. 19, 1965, in recognition of the inventor's birth bicentennial.

Robert Fulton is recognized in America for building the first steamboat in the United States. He was born Nov. 14, 1765, in Lancaster County, Pa.

He showed talent as an artist as a youngster, but moved to Europe in 1786 and pursued an interest in steam engines.

Fulton built and successfully tested a submarine named the Nautilus in 1801, at the behest of French leader Napoleon Bonaparte. Fulton had also proposed the construction of a steam-powered warship, an idea that Napoleon dismissed out of hand.

Napoleon also dismissed Fulton, who then traveled back to England to further develop his ideas.

It wasn’t until he returned to America in 1806 that Fulton had an opportunity to build the Clermont, his first functioning passenger steamboat, which plied the waters between New York City and Albany. A second ship, New Orleans, traveled the Ohio River and the Mississippi.

A 5¢ stamp honoring him was issued Aug. 19, 1965 (Scott 1270), in recognition of the year of his birth bicentennial. The stamp design shows Fulton represented in a bust by Jean Antoine Houdon, along with an image of the Clermont.