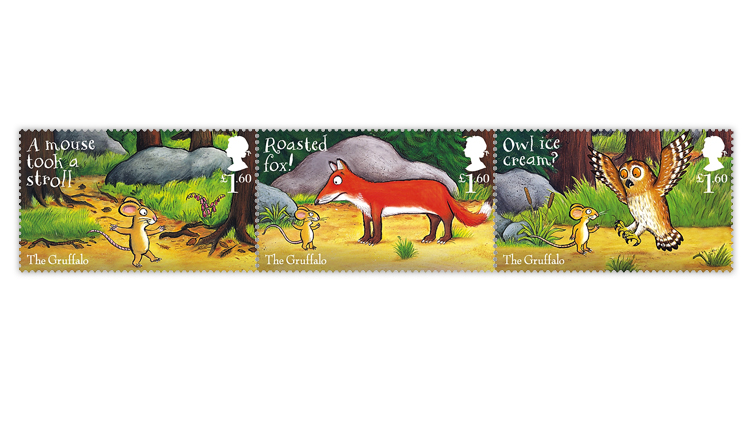 New stamps from Great Britain mark the 20th anniversary of The Gruffalo. This children’s book by Julia Donaldson and illustrated by Axel Scheffler begins, “A mouse took a stroll through the deep dark wood.” On the strip of three £1.60 stamps, the mouse en 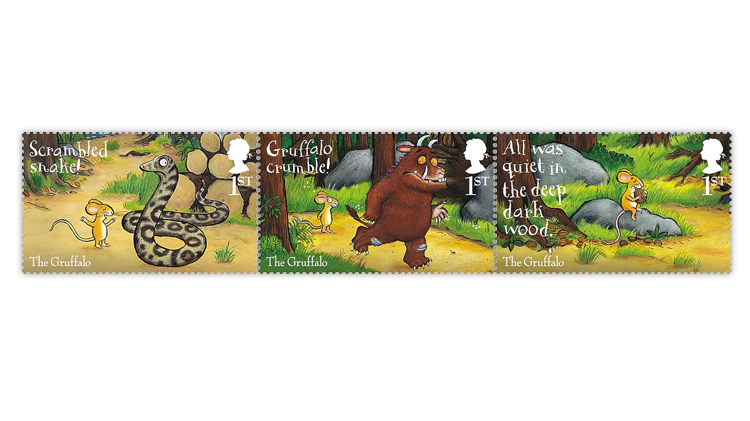 The strip of three nondenominated first-class stamps in Royal Mail’s The Gruffalo set continues the story with the mouse outsmarting a snake and the Gruffalo. 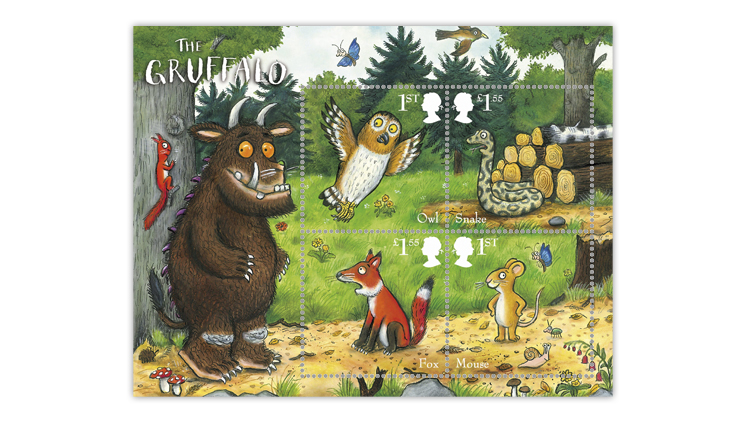 Great Britain’s souvenir sheet, which like the book The Gruffalo was illustrated by Axel Scheffler, pictures the reactions of the owl, snake and fox to the Gruffalo. 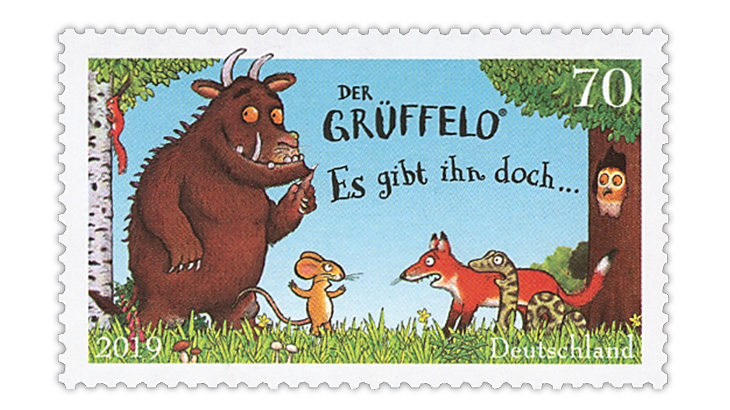 Germany issued a stamp honoring The Gruffalo on March 1. 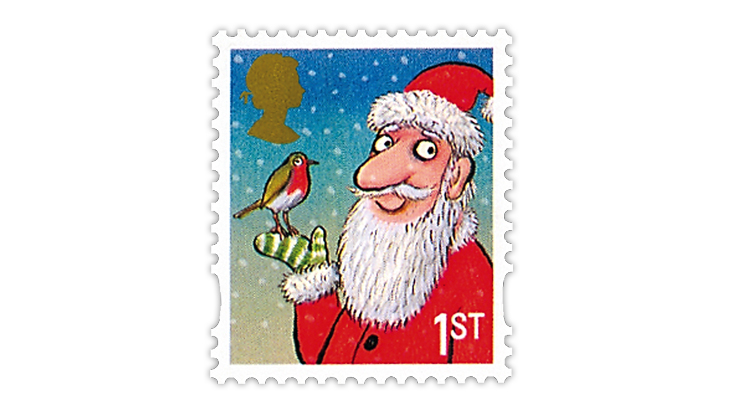 Axel Scheffler created the illustrations for Great Britain’s 2012 Christmas stamps, including this nondenominated first-class stamp showing Santa Claus and a robin.
Previous
Next

Great Britain’s Royal Mail is celebrating the 20th anniversary of the children’s book The Gruffalo on 10 stamps to be issued Oct. 10.

Considered a modern classic, this picture book was written by Julia Donaldson, illustrated by Axel Scheffler and first published in 1999 by Macmillan Children’s Books in the United Kingdom. In the 20 years since, it has been translated into 84 languages; sold more than 14 million copies worldwide; and transformed into a film, television series and stage play.

It also has been previously commemorated on a postage stamp. Germany issued a single €0.70 stamp March 1 of this year showing the book’s characters. (Illustrator Scheffler was born in Hamburg, Germany. Donaldson was born in London).

Six of the stamps from Great Britain are se-tenant (side-by-side) in two strips of three. The other four stamps are se-tenant in a souvenir sheet.

The stamps in the strips of three tell the story. It begins, “A mouse took a stroll through the deep dark wood ... ”

The first of the three £1.60 stamps pictures the mouse in the woods and is inscribed “A mouse took a stroll.”

In its new-issue announcement, Royal Mail describes what happens next as the mouse meets potential predators in the deep dark wood: “Mouse cleverly avoids being eaten by claiming to be visiting the Gruffalo, his imaginary beast whose favourite food is the predator …”

For example, as pictured on the other two stamps in the £1.60 strip, the mouse tells Fox that a gruffalo’s favorite food is “Roasted fox!” and informs Owl that it is “Owl ice cream.”

The strip of first-class nondenominated stamps begins with the mouse encountering Snake. According to the mouse, a gruffalo likes to eat snake scrambled.

As pictured on the middle stamp in the first-class strip, the mouse is in for a surprise when he discovers that there is such a thing as a gruffalo.

Royal Mail reveals the ending of the story, “To escape him [the gruffalo], Mouse claims that he is the most feared creature in the wood (the big, bad mouse) and to prove this the Gruffalo accompanies him back through the wood. They encounter each of the predators in turn, who not surprisingly run away. Convinced that the Mouse really is a feared and fierce opponent, the Gruffalo finally makes his escape too.”

But before Gruffalo runs away, the mouse tells him that his favorite food is “Gruffalo crumble.”

On the final stamp in the strip, “All was quiet in the deep dark wood” as the mouse eats a nut he found.

Royal Mail commissioned the book’s illustrator, Scheffler, to create the illustrations for the souvenir sheet.

“The scene is a synopsis of the main story, with Mouse looking on knowingly, as the other characters react in alarm to the Gruffalo,” Royal Mail said.

The stamp in the lower right also depicts a butterfly in the air and a bug on the ground.

The Gruffalo, a squirrel, butterfly, bird and mushrooms are pictured in the selvage of the sheet.

This is the second time Royal Mail has worked with Scheffler. He also was commissioned to design the 2012 Christmas stamps (Scott 3119-3126). These designs depict reindeer, birds, a penguin, snowman, cat, mouse and Santa Claus.

In addition to the stamps, Royal Mail is offering first-day covers, 11 postcards reproducing the designs of the stamps and the souvenir sheet, a generic pane of 10 stamps with se-tenant labels, and a presentation pack.

The presentation pack includes the stamps, the souvenir sheet and what Royal Mail describes as “an exclusive Snakes and Ladders game.”