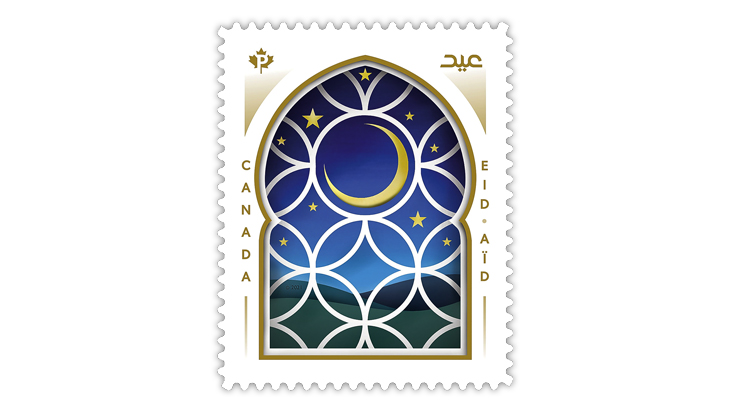 Canada Post’s new Eid stamp shows a decorative arched window through which a large crescent moon and stars are visible. The stamp, which is being issued April 22 in booklets of 10, celebrates the Islamic festivals of Eid al-Fitr and Eid al-Adha.

Canada Post will issue its third stamp in celebration of Eid on April 22.

The new nondenominated permanent-rate stamp (currently 92¢) features a stylized evening scene as viewed through a decorative arched window. A large crescent moon and nine five-point stars appear in the sky above gentle rolling hills in the background.

The designs of the first and second Eid stamps include Arabic script that reads “Eid Mubarek,” which means “Have a blessed Eid” in translation.

In announcing the new Eid stamp on its website, Canada Post said, “Eid al-Fitr (Festival of Breaking the Fast) and Eid al-Adha (Festival of Sacrifice) are two of the most important religious holidays in Islam. Eid al-Fitr marks the end of Ramadan, the most sacred month in the Islamic lunar calendar. Eid al-Adha commemorates the end of the annual Hajj pilgrimage to the Kaaba in Mecca — the holiest site in Islam.”

The Kaaba, which stands at the center of the Masjid al-Haram in Mecca, Saudi Arabia, is the most sacred site in Islam.

Eid al-Adha pays tribute to the determination of Abraham to sacrifice his son as God had instructed him. Abraham’s willingness to offer his son’s life demonstrated his obedience to God.

“Both festivals embody core Islamic values. They also focus on charitable works, including helping others and sharing with the less fortunate. More than one million Muslims in Canada celebrate Eid al-Fitr and Eid al-Adha,” Canada Post said.

The crescent moon is a powerful symbol of the Islamic faith. Both Eid al-Fitr and Eid al-Adha begin when the new moon is seen, according to Canada Post.

Lionel Gadoury, Andrew Conlon and Brad Pyn of Context Creative, a design firm based in Toronto, Ontario, designed the new Eid stamp. The stamp measures 28 millimeters by 38mm. It was printed by Lowe-Martin in booklets of 10 (product no. 414165111) using seven-color lithography. A total of 1.2 million stamps (120,000 booklets of 10) were produced.