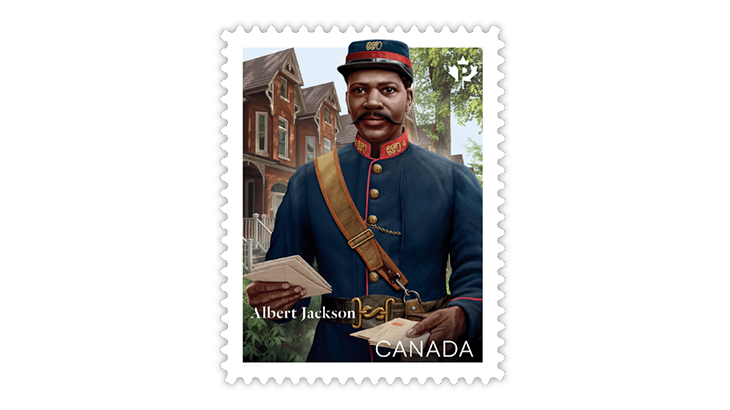 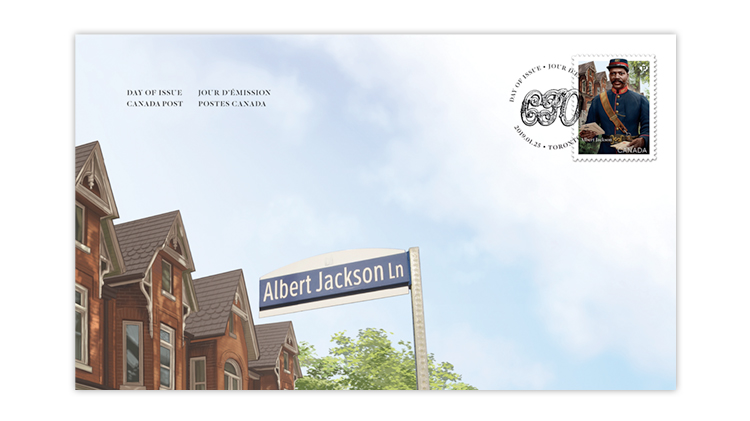 Canada Post's official first-day cover for the Albert Jackson stamp shows the lane in Toronto named after the letter carrier.
Previous
Next

Jackson (circa 1857-1918) is once again helping to deliver the mail, thanks to this stamp celebrating his groundbreaking efforts.

The permanent “P” rate stamp (domestic first-class, currently 90¢) depicts Jackson in his uniform in Toronto, Ont., about to deliver letters from his mailbag.

Jackson’s legacy began to come to light in 2012 in a story in the Toronto daily newspaper, The Star, which drew information from a book by Karolyn Smardz Frost and the journal Ontario History. Subsequently, a play was written and performed about the pioneering mailman.

Born into slavery in Delaware, Jackson was just a boy when his family escaped to Canada. Two older brothers had been sold into slavery, which likely was a factor in their father’s death. Jackson’s mother, Ann Maria, fled with her seven remaining children via the Underground Railroad to Canada.

The family settled in Toronto, and, as he came of age, Albert Jackson won a position as a letter carrier in 1882. When he reported for work, he faced discrimination from his colleagues, who refused to train him.

Debate over the situation raged in the city for weeks until political pressure, especially from Toronto’s black community and newspapers, triumphed, and Jackson was able to walk his route. He began his training June 2 and delivered mail until his death in 1918.

Jackson’s descendants were on hand in downtown Toronto in July 2017 when a historic plaque honoring him was installed and unveiled. ”The Toronto General Post Office stood on this site from 1873 to 1958, and it was here that Jackson picked up mail for delivery along his routes,” the sign reads.

His descendants also were present for the Jan. 24 unveiling ceremony for the commemorative stamp.

The stamp was designed by Andrew Perro and illustrated by Ron Dollekamp, who said recreating Jackson’s look was the biggest challenge, according to Canada Post’s January-February Details magazine.

“I wanted to show him performing his duty with a slight smile and a spring in his step, as if he has stepped out of history to hand you your mail,” Dollekamp said.

The stamp measures 26 millimeters by 33mm. Lowe-Martin printed it by four-color lithography in booklets of 10. The cover of the booklet repeats the stamp image.

Canada Post’s first-day cover is canceled in Toronto. Canada Post describes the cachet on the FDC as depicting “the modern-day street sign marking Albert Jackson Lane, near the Toronto intersection of Harbord Street and Bathurst Street. The lane was dedicated to Jackson in 2013.”

Canada Post products are available online at www.canadapost.ca/shop. Stamps and FDCs are available by mail order from Philatelic Customer Service, Box 90022, Canada Post Place, 2701 Riverside Drive, Ottawa, Ontario K1V 1J8 Canada; or by telephone from the United States and Canada at 800-565-4362, and from other countries at 902-863-6550.

Canada Post began its Black History stamp series in 2009 to help celebrate February as Black History Month. The first two stamps in the series (Scott 2315-2316) featured Abraham Doras Shadd, who played a role in the Underground Railroad and was reported to be the first black person to hold a political office in Canada; and Rosemary Brown, the first black woman to be elected to public office.