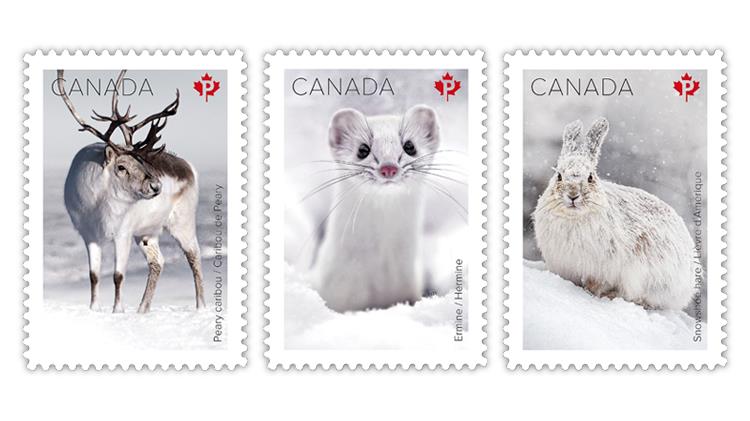 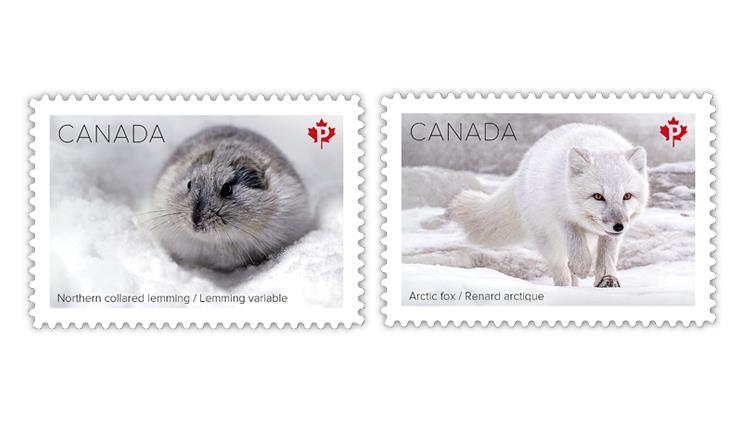 The northern collared lemming and Arctic fox are featured on the two horizontally formatted stamps in Canada’s Snow Mammals issue. 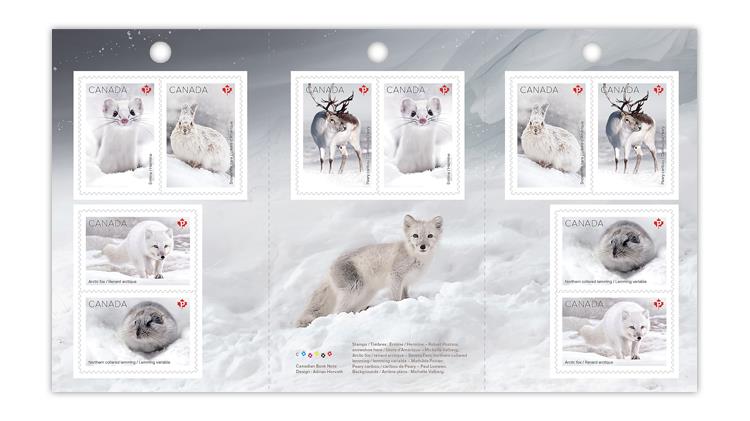 The stamps are arranged in se-tenant pairs in the Snow Mammals booklet pane of 10. Shown in the background is a photograph of an Arctic fox.
Previous
Next

Featured are the Peary caribou, ermine and snowshoe hare on vertically formatted stamps, and the northern collared lemming and Arctic fox on horizontally formatted stamps. Each stamp is nondenominated, paying the permanent domestic letter rate (92¢).

Canada Post said in a press release announcing the stamps that these mammals “undergo a change in coat colour as the result of a complex physiological process influenced by changes in daylight hours. Moulting is a gradual, twice-yearly process that starts around the time of the first snowfall and reverses in the warmer months, beginning around the time of the spring melt.”

In addition to showing a photograph of the animal, each stamp includes a hidden design detail revealed only when viewing the stamp under ultraviolet light.

According to Canada Post, “In the lower left-hand corner of each stamp, in fluorescent ink visible only under black light, is a set of each animal’s tracks as they would appear in the fresh snow.”

In its new-issue publication for stamp collectors, Details, Canada Post said that only about 19 species of mammals are known to change color in the winter, and Canada is home to 12, more than any other country.

Canada Post added: “The five featured on these stamps represent the hunters and the hunted. The ermine and the Arctic fox are predators that blend into the snowy background to sneak up on their next meal. The snowshoe hare, Peary caribou and northern collared lemming are prey that rely on their camouflage to avoid detection.”

Named for polar explorer Robert Peary, the Peary caribou (Rangifer tarandus Pearyi) is found on the Arctic islands of Nunavut and the Northwest Territories. The smallest subspecies of caribou, it averages about 3 feet at shoulder height, with females weighing around 130 pounds and males about 240 pounds, according to the Nature Conservancy Canada.

The website of that conservation charity provides details of how this caribou is equipped to live on the tundra: “Peary caribou have a mostly white coat in winter, which changes to grey in summer. Its dense coat and smaller size, which conserve heat, are adaptations that help Peary caribou survive harsh Arctic winters. This subspecies also has wide, sharp hooves to navigate and forage in snow.”

The ermine (Mustela erminea) is more widely distributed than the Peary caribou, found in all of Canada’s provinces and territories and in northern regions of the United States and Europe.

In its online creature feature, the Natural Resources Council of Maine describes this member of the weasel family: “With a small head and legs, elongated neck and body, the ermine reaches a maximum length of just over one foot. Nimble and vicious, a hunting ermine will run back and forth, in and out, jumping and hopping in a sort of a dance to distract its prey. … Running and bounding, they can reach speeds of eight miles per hour. They can jump as high as six feet. They easily escape potential predators.”

The snowshoe hare (Lepus americanus) resides in both Canada and the United States.

According to the U.S. National Park Service, “Snowshoe hares live in the boreal forests of North America and are active year-round. They gain their curious name from their very large hind feet that are lined with stiff hairs that form a snowshoe, supporting their weight on the surface of the snow.

“They blend in well with their surroundings because of their seasonal variation in fur color, from brown in summer to almost pure white in winter. The gradual shedding of the coat and replacement of the guard hairs occurs two times per year and is triggered by changes in day-length.”

Lemmings are small rodents related to muskrats and voles. According to the Canadian Encyclopedia, of the about 16 species of lemmings known, seven are found in Canada. Among these is the collared lemming (Dicrostonyx groenlandicus), the only rodent in North America that turns white in winter.

Collared lemmings spend much of the winter building burrows and tunnels under the snow. To do this, they undergo another seasonal change, developing “double digging claws on the front toes to break through ice and snow,” according to the Alaska Department of Fish and Game.

As its name suggests, the Arctic fox (Vulpes lagopus) is native to the Arctic regions, including Iceland, Greenland, Alaska and northern Canada.

The website of the Canadian Geographic magazine reports that this small canine has the “warmest pelt of any animal found in the Arctic, adding that “It can endure temperatures as low as -50C [-58 degrees Fahrenheit] before its metabolism increases to provide warmth.”

The magazine also says of this fox’s eating and hunting habits: “The Arctic fox is both a hunter and scavenger. To find prey during the winter, the Arctic fox uses its hearing and sense of smell to detect small animals that are active underneath the snow.”

Canadian Bank Note printed the stamps by lithography in booklets of 10 and a souvenir sheet of five. The quantities printed are 300,000 booklets and 70,000 souvenir sheets.

The stamps are in five se-tenant (side-by-side) pairs in the booklet, as shown nearby. The Arctic fox is featured in the background of the booklet pane and is shown on the booklet cover as well.

Both the booklet pane and souvenir sheet include images of symbolic animal paw prints, representing the five colors used to print the stamps.