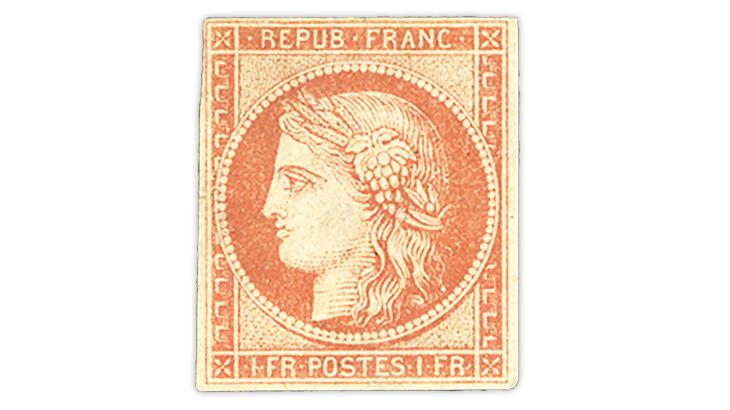 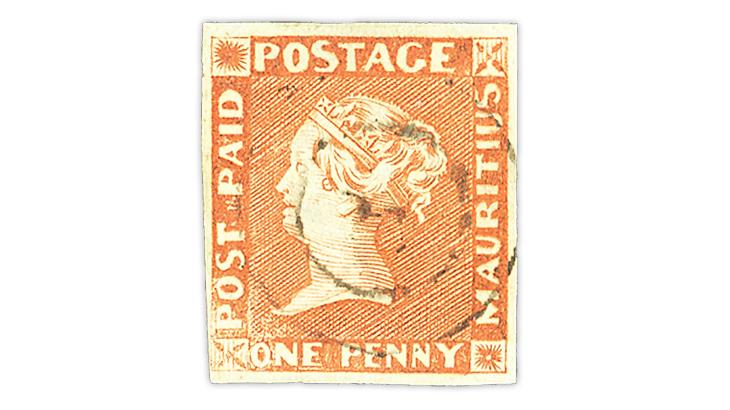 This Mauritius 1848 1-penny orange Queen Victoria stamp on yellowish white paper and inscribed “POST PAID” in the left margin will cross the Cherrystone auction block during the firm’s two-day sale in New York City.
Previous
Next

More than 1,350 lots of United States and worldwide stamps and postal history will be up for bids when Cherrystone Philatelic Auctioneers holds its Sept. 15-16 sale at the firm’s gallery in New York City.

“Great Britain and British Commonwealth are well represented, covering all Reigns with many high values and sets from Aden to Zanzibar,” Cherrystone said in its introduction to the two-day auction. “Also featured is a collection of Imperial China, with Dowagers and extensive Red Revenues which include small 4¢ and inverted 2¢ and $5 overprints.”

The sale concludes with a diverse variety of collections and large lots “ranging from single country albums to specialized collections (Postal History of Louisiana, British Commonwealth) and multi-carton worldwide properties and large cover lots,” according to Cherrystone.

An early rarity of France, an unused example of the 1849 1-franc dull orange red Ceres on yellowish paper (Scott 8a), will be offered on the first day of the auction. The stamp is a shade variety of the 1fr vermilion Ceres (8), which is also quite scarce.

Cherrystone describes the stamp as having lightly hinged original gum and “full to mostly large margins on all four sides, nice color and bright shade.”

A number of expertizers, including France and colonies specialist and dealer Roger Calves, have signed the stamp. A 2018 Jean-Francois Brun certificate accompanies the stamp.

The Scott Classic Specialized Catalogue of Stamps and Covers 1840-1940 values a 1fr dull orange red Ceres In unused condition at $95,000. The example in the Cherrystone sale is listed with a minimum bid of $35,000.

Great Britain and the British Commonwealth are well represented in the second day of the auction.

Mauritius, a small island in the Indian Ocean east of Madagascar, is represented with three lots, one of which is a handsome used example of the 1848 1-penny orange Queen Victoria on yellowish white paper (Scott 3a).

Cherrystone notes that the stamp is an early impression from position 10 in the original sheet of 12 that features “margins all around” and “beautiful fresh color.”

Against a Scott Classic Specialized catalog value of $7,250, Cherrystone offers the stamp with a starting bid of $3,250.

The single catalog prepared for the two-day sale can be viewed on the Cherrystone website. Online bidding options are also available.