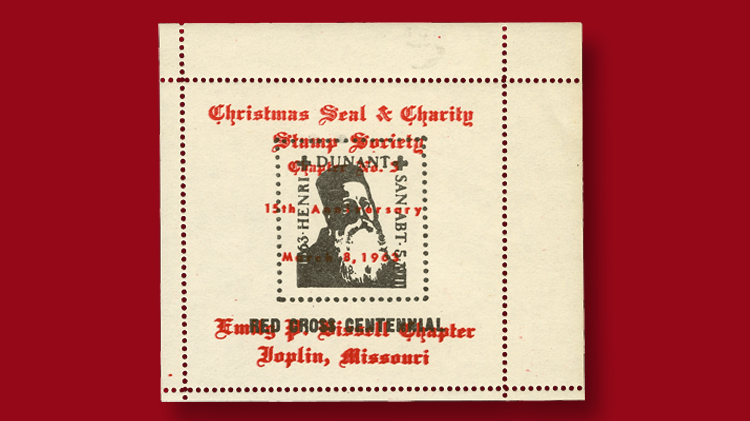 In my column in the Jan. 13, 2017, issue of Linn’s, I presented the cinderella souvenir sheet shown nearby.

Privately produced by the Christmas Seal and Charity Stamp Society, the sheet features Henri Dunant, founder of the international Red Cross movement. The stamplike label in the center doesn’t include a country name, but it is inscribed “San Abt.5.1911”.

Thanks to Linn’s reader Richard Hall of Asheville, N.C., I now know the meaning of the label in the center; it is a Swiss soldier stamp.

Swiss soldier stamps were issued during both world wars to raise funds for USO-type facilities.

Issued by virtually every unit of the Swiss army, they were very popular among the general Swiss populace, and remain popular today among Switzerland collectors.

Hall reported that soldier stamps come in all sorts of formats: perforated and imperforate, miniature sheets, progressive proofs, etc. There are catalogs for each war’s issues. The catalog for World War II runs to 635 pages.

Founded in 1931, the Christmas Seal and Charity Stamp Society continues to prosper today, publishing a quarterly all-color journal, in addition to several catalogs for U.S. and foreign seals.

Further information and a membership application can be obtained from Secretary-Treasurer Lou Caprario, 91 Fairview Ave., West Orange, NJ 07052, or can be accessed on the society website.