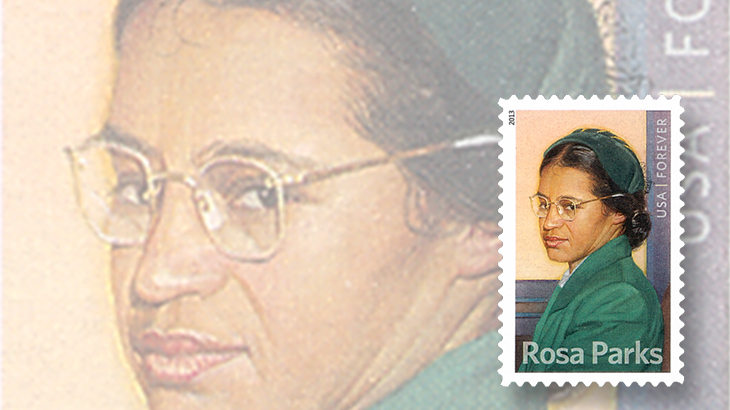 Rosa Parks, who took a stand against racial segregation on Dec. 1, 1955, was honored on a forever stamp issued in 2013.

Sitting in a segregated Montgomery, Ala., city bus 60 years ago today, on Dec. 1, 1955, 42-year-old seamstress Rosa Parks, who was also a secretary for the Montgomery NAACP, was instructed by the driver to vacate her seat for a newly boarded white male passenger. She quietly refused, and subsequently was arrested for violating the segregation laws then in force.

The Alabama law stated that black people had to sit at the back of the bus, and it also said that when the bus was full, a seated black person was required to relinquish the seat to a standing white person. The front 10 seats of the bus reserved for white passengers were all filled, and at the time of her arrest, Parks was seated in the first row directly behind the whites-only section.

Parks was convicted on Dec. 5 and fined $10 plus $4 in court costs. The Montgomery Bus Boycott, led by Martin Luther King Jr., began as a result of Parks’ arrest, and continued for more than a year to protest the laws of racial segregation.

Parks’ courageous act of defiance and the subsequent bus boycott were key events in the U.S civil rights movement.

Rosa Parks is often identified as the "Mother of the Civil Rights Movement.” She continued to work as a civil rights activist for many years, and died at age 92 in Detroit, Mich., on Oct. 24, 2005.

A United States forever stamp honoring Rosa Parks was issued Feb. 4, 2013, the 100th anniversary of her birth (Scott 4742). The stamp illustration shows her seated on the Montgomery city bus.