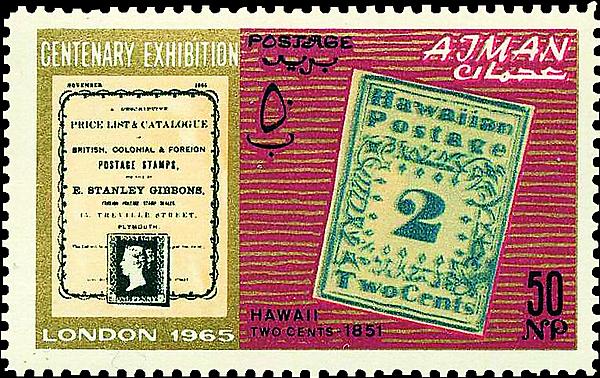 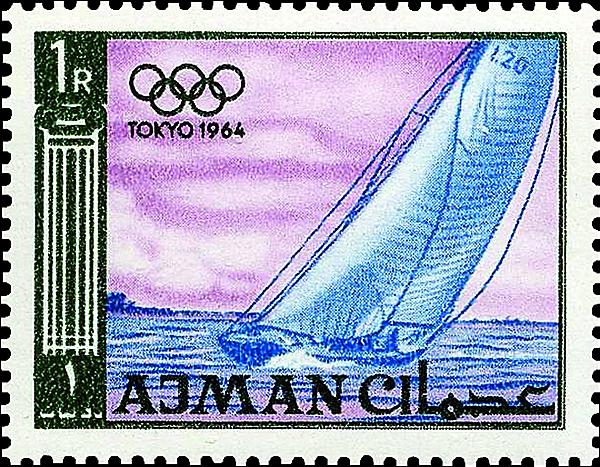 Figure 4. Ten stamps were issued by Ajman in 1965 to commemorate the 1964 Olympic Summer Games in Tokyo. The 1-rupee stamp features a sailing yacht. 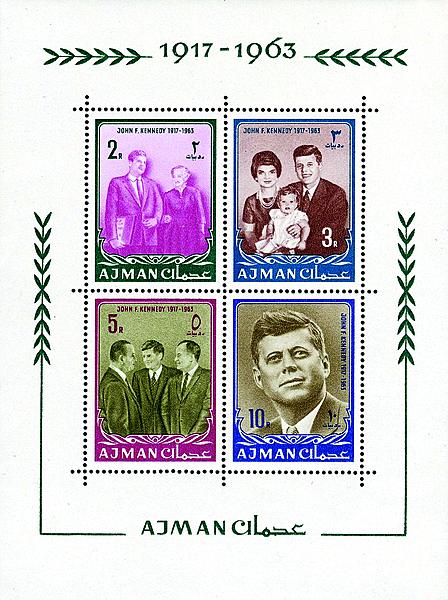 Figure 3. A 1964 four-stamp souvenir sheet from Ajman honoring U.S. president John F. Kennedy one year after his assassination. The sheet is part of a set that also includes eight individual stamps. 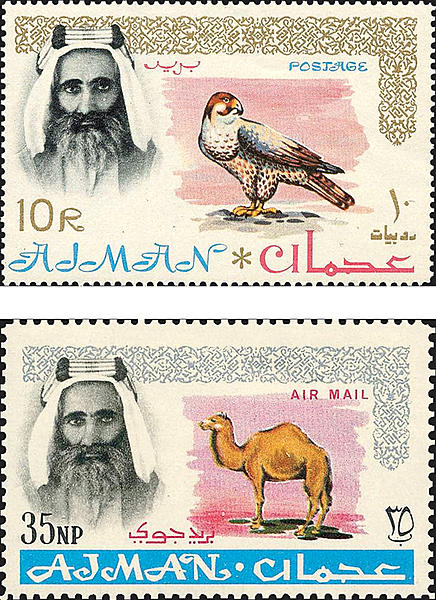 Figure 2. The first stamps of Ajman were issued in 1964. The 10-rupee Lanner Falcon stamp (top) is the high value of the 18 regular issues. The airmail set of nine, issued in 1965, includes the 35-naye paise Camel stamp (bottom).

Figure 1. These early essays for stamps of Ajman feature a turtle on one and a bird on the other. Both essays also show Ajman’s ruler at the time, Sheikh Rashid bin Humaid al Nuaimi (1902-81).

In the 1970s and 1980s, the Trading Posthorn section in Linn’s Stamp News carried numerous advertisements asking for worldwide stamp exchanges. Most of the advertisers stressed that they did not want IC, Trucials or CTOs.

The abbreviation IC referred to Iron Curtain countries, the Trucial States are today’s United Arab Emirates, and CTOs are stamps that have been canceled to order.

These categories were considered by many to be the outcasts of stamp collecting.

One of the Trucial States, Ajman, is a tiny sheikhdom located in the southeastern part of the Arabian Peninsula, tucked in between Sharjah and Umm al Qiwain.

The state had a population of some 4,400 people in the 1960s, and its area amounted to roughly 100 square miles (260 square kilometers). It was ruled by Sheikh Rashid bin Humaid al Nuaimi (1902-81). The enclave of Manama also belongs to Ajman.

Ajman’s postal communications with the rest of the world seem to have been nonexistent until the early 1960s. Any mail would have had to be taken to the neighboring state of Dubai, where there was an Indian post office since 1909 using Indian postage stamps. This office was administered from Karachi, and only the Dubai postmarks indicate the origin of the covers. Such covers are quite scarce today.

Following the independence of India, a British postal agency was established in 1948. Stamps of Great Britain were surcharged with denominations in Indian currency to be used at the various British postal agencies in Eastern Arabia, including Dubai.

In 1961, a set of 11 stamps inscribed Trucial States was released. The low values depict seven palm trees symbolizing the seven Trucial States: Abu Dhabi, Ajman, Dubai, Fujeira, Ras al Khaima, Sharjah and Umm al Qiwain. However, the country name is a misnomer, because the stamps were only used in Dubai.

This set is listed under the name Trucial States in the Scott Standard Postage Stamp Catalogue.

The Dubai Post Department took over the country’s postal service in 1963. A long definitive set of stamps was issued June 15, 1963, featuring various kinds of shellfish, local buildings and a portrait of the ruler, Sheikh Rashid bin Saeed al Maktoum (1912-90), on the top value (Dubai Scott 1-17).

This year marks the 50th anniversary of the establishment of Ajman’s postal service in 1964. Indian currency was still in use in the Trucial States, with 1 rupee being equal to 100 naye paise.

Several smaller sheikhdoms also wanted to establish their own postal services, and a series of essays was printed.

Shown in Figure 1 are two Ajman essays. The 30np essay at left depicts a turtle, and the 50np value shows a bird. A portrait of Ajman’s ruler is also included.

Very similar essays were also printed for Fujeira and Umm al Qiwain. These essays are similar to Dubai’s first stamp issue, and I believe they were produced by the same printing company in Lebanon.

However, the Lebanese company didn’t get the order. Instead, the printer of Ajman’s first stamps was Heraclio Fournier, a company located in the Spanish city of Vitoria.

It is a very colorful set depicting the fauna of Arabia. There were 18 regular postage stamps (Scott 1-18), nine airmails (C1-C9) and nine Official stamps (CO1-CO4 and O1-O5). All stamps also carry the portrait of Sheikh Rashid.

The first part of this long set was issued June 20, 1964. The Official stamps and airmails appeared in 1965.

The tiny country of Ajman had no experience operating a postal service and handling the production and marketing of its postage stamps. Foreign agencies were eager to give Ajman a helping hand, and they soon had complete control of Ajman’s stamp program.

These early issues were quality stamps produced by the Austrian State Printing Works in Vienna. To complicate matters somewhat, the stamps were available both perforated and imperforate.

On May 6, 1965, Ajman released a set of eight stamps and two souvenir sheets commemorating the 125th anniversary of Great Britain’s (and the world’s) first postage stamp, the Penny Black. That set also celebrated the centenary of the Stanley Gibbons stamp catalogs.

The stamps each depict a different classic stamp rarity. The example in Figure 5 is the 50np stamp (Scott 41) showing the 2¢ Hawaiian Missionary stamp of 1851-52.

This is where the Scott standard catalog ends its listing of Ajman.

A catalog note states that the stamps of Ajman were replaced in 1972 by those of United Arab Emirates.

The German Michel Gulf States Catalogue lists Ajman stamps all the way into 1973, but a catalog note states, “All stamps issued after 31 July 1972 must be defined as unofficial issues.” Agency contracts were terminated on that date, according to Michel, but stamps were still being sold.

After May 1967, the number of Ajman new issues exploded. There were gaudy pictorials featuring all kinds of popular topics, none of which had any relevance to Ajman.

Most of the people of Ajman are Muslim, but many of the pictorial stamp issues feature Christian themes in the form of paintings.

Paintings of nudes were also shown on stamps inscribed with the name Ajman.

I very much doubt that Sheikh Rashid approved these designs. The Ajman government had no control over what its philatelic agents printed and sold to worldwide collectors.

A post office was established in Ajman’s dependency of Manama July 5, 1966. A number of Ajman stamps were suitably overprinted to be used in this tiny enclave located between Sharjah and Fujeira.

Ajman covers from the 1960s are quite scarce. Most of those found today were mailed from the Ajman post office to philatelic firms or the editors of stamp magazines. I suppose they contained announcements of new issues. Genuine commercial mail must be very scarce.

Ajman joined the United Arab Emirates in 1971. The agreements with the philatelic agencies were rescinded, with the final date for new stamp issues being July 31, 1972. However, this did not prevent the agents from producing even more stamps. These later issues are completely bogus.

Today, Ajman has undergone massive development. Sheikh Rashid passed away in 1981, and his son succeeded him as the country’s ruler. As the state has limited oil resources, the establishment of a free zone has attracted large investments from abroad. However, it seems the construction boom has come to a standstill.

The population of Ajman was reported as 262,000 at the end of 2010. About 95 percent of the population resides in Ajman City.

Ajman is home to the Gulf Medical College and the largest health care facility in the United Arab Emirates.

Fifty years after Ajman entered the stamp scene, it is time to look at the country with different eyes. After all, there was a postal service in the country and some of the stamps issued were obviously used.

A good starting point for an Ajman collection is to select the 1964-65 definitives and then avoid all issues with irrelevant designs. This limited selection will fill a few album pages, and all of the stamps are readily available and quite affordable.

If you succeed in locating a commercial cover or even a first-day cover, that would certainly constitute the top item in your Ajman collection.