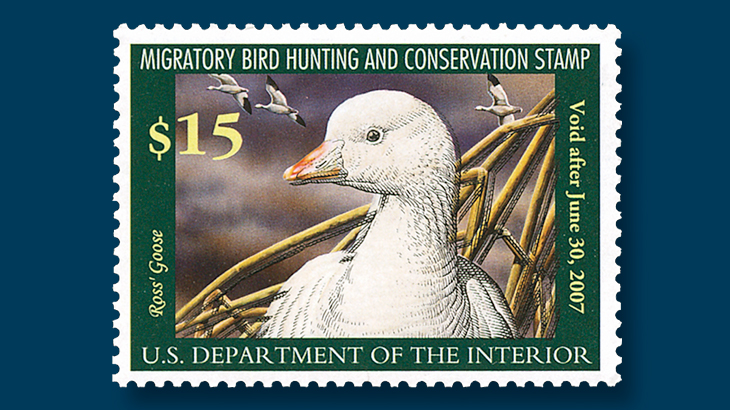 When the 2007 federal duck stamp was issued, collectors saw the writing on the wall.

The days of engraved printing on federal duck stamps appeared to be over.

With new proposed changes to the duck stamp program, it seems like it’s a done deal that engraving is being banished from these popular stamps.

Linn’s learned of the changes while researching the Jan. 8 page 1 story about proposed rule changes for the contest that will produce the 2019 stamp.

A section titled “Updating Technological Advances in Stamp Design and Printing” in the same proposal states: “Currently both [section] 91.15 and [section] 91.23 contain regulations and references to a stamp production process that is no longer used. We propose to remove these outdated statements to reflect current technology in this revised proposed rule.”

Section 91.15 describes the “Suitability of entry for engraving” and notifies contest entrants of specific items that should be paid attention to when creating the artwork so an engraver can interpret the design correctly. It states that “The engraver is primarily responsible for line interpretation and discipline, creating the miniature image of bird(s) appearing on the stamp.”

The other section, 91.23, is in reference to “Scoring criteria for contest” and notes that entries will be judged on the basis of “anatomical accuracy, artistic composition and suitability for engraving in the production of a stamp.”

The United States currently has two postage stamp printers under contract: Ashton Potter and Banknote Corporation of America. Both have the technological capability to produce engraved stamps, so the statement that this production process is no longer used is incorrect.

No longer used by the duck stamp office, yes, but not completely gone.

And calling the process outdated is just offensive.

Engraved stamps are some of the most treasured objects in a stamp collector’s album.

While engraved stamps cost more to produce, I would like to remind the federal duck stamp office that it now charges $25 per stamp. Getting a stamp collector to put forth that amount of money for something that is now solely printed via offset without a feel of receiving something for your $25 is hard to accept for some.

If the Postal Service can produce an engraved pane of six forever stamps and sell it for less than $3, as it did in 2016, the duck stamp office should reconsider eliminating the engraving process and dismissing it as “outdated.”

It’s not essential that engraving be part of the illustration on the duck stamp. Including engraving in the stamp frame, the denomination or even the selvage area would be an improvement.

An interpretation of the artwork as an engraving in the selvage of the pane of one would be stunning, and I think would result in increased sales.