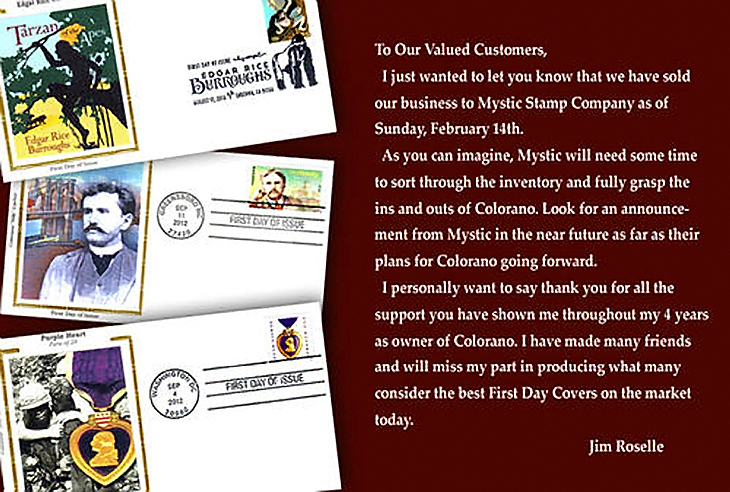 This announcement on the Colorano website states that the venerable producer of silk-cacheted first-day covers has been sold to Mystic Stamp Co. as of Feb. 14.

Jim Roselle, owner of Colorano for the past four years, made the announcement on the homepage of the Colorano website.

In his note to Colorano’s “valued customers,” Roselle said that the sale to Mystic was effective as of Feb. 14.

“I personally want to say thank you for all the support you have shown me … as owner of Colorano,” Roselle wrote. “I have made many friends and will miss my part in producing what many consider the best First Day Covers on the market today.”

“We became aware of the opportunity in early February and quickly reached an agreement to buy the inventory and assets including the website,” Sundman said.

“We moved the inventory to Camden in mid-February. Because this happened so quickly and our colleagues are fully occupied on other tasks, Colorano had to go on the back burner. We plan to organize the inventory in April.

“At this time we don’t have plans to create new Colorano covers. I would like to make covers for a few popular new stamps or something special, but have no definite plans.

“Colorano covers are very popular with Mystic and Fleetwood customers so we expect to sell the back issues to our current customers.

“In a few weeks we’ll take time to learn more about Colorano and see what we can do with it in the future.”

“We’ve made only Fleetwood FDCs since 2007,” Sundman said.