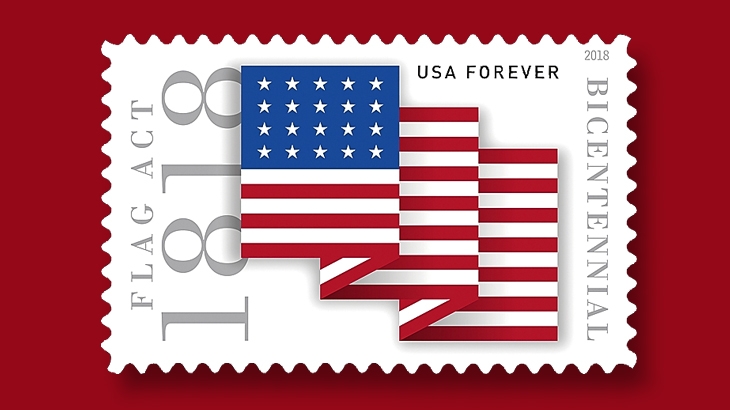 A forever stamp commemorating the 200th anniversary of the 1818 Flag Act will be issued June 9 in Appleton, Wis.

First-day ceremony details have been revealed for the upcoming United States commemorative stamp celebrating the 200th anniversary of the Flag Act of 1818.

The ceremony is open to the public. The Postal Service encourages attendees to RSVP online at www.usps.com/flagact to gain entrance to the event. That USPS web page was not yet active as of the morning of May 1.

Pat Mendonca, senior director for the postmaster general, will represent the Postal Service at the event.

The new stamp celebrates the 1818 Act of Congress that provided a standard for the U.S. Flag of 13 stripes to signify the original 13 colonies, and stars that correspond in quantity to the number of states.

“The stamp art celebrating this anniversary shows a flag with 20 stars, the number of states in the Union when the Flag Act of 1818 went into effect,” the Postal Service notes. “Ethel Kessler was art director for the stamp and typography was by Kit Hinrichs. Hinrichs shows a flag with crisp folds and a layering effect that conveys a sense of the dynamism of the young nation.”