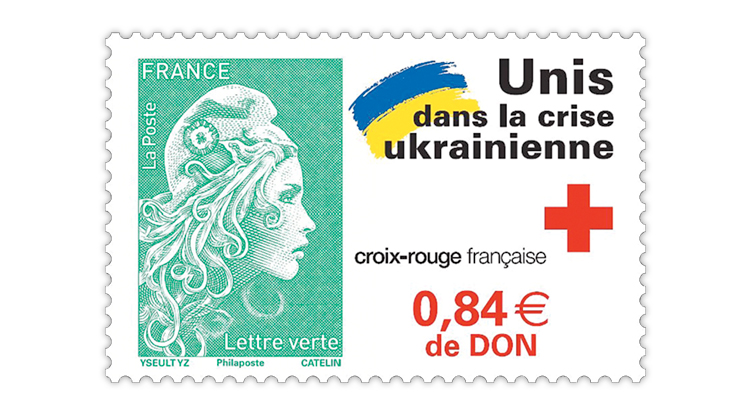 A new French semipostal stamp includes an €0.84 donation to the French Red Cross for use in helping the people of Ukraine.

Since early March, La Poste has been working with the French Red Cross and other charities to aid the people of Ukraine after the Russian invasion, and the new stamp continues that effort.

The semipostal sells for €2: €1.16 for postage and a €0.84 surtax for the French Red Cross to use in Ukraine and neighboring countries housing refugees.

The stamp was unveiled June 22 by Philippe Wahl, chairman and CEO of the La Poste Group; and Vadym Omelchenko, ambassador of Ukraine to France, according to a June 22 press release from La Poste Group.

The left side of the semipostal features an image of France’s Marianne l’Engagee (Marianne the Committed) stamp introduced in 2018. The inscription “letter verte” in the lower right and the overall green color of this stamp image denote that it pays the green rate for domestic letters that travel only by ground transportation. As of Jan. 1, that rate is €1.16.

On the right side of the semipostal are symbols of the Red Cross and Ukraine’s blue and yellow flag, plus three inscriptions.

The inscription at the top, “Unis dans la crise ukrainienne,” translates to “United in the Ukrainian crisis.” The other two inscriptions refer to the French Red Cross (center) and the €0.84 donation (bottom).

Philaposte printed the semipostal by photogravure in panes of 15. A total of 525,000 semipostals were produced.