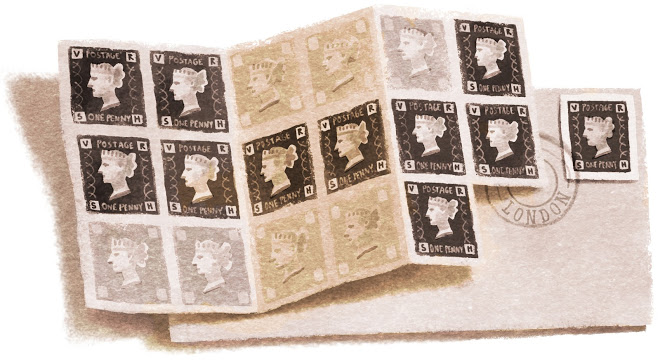 Four Commonwealth countries were welcomed by a Google Doodle honoring the Penny Black stamp on May 1.

The 175th anniversary of the first postage stamp, Great Britain's Penny Black, is May 6, but the stamp was placed on sale May 1, 1840, for mailers to use beginning on May 6, the designated issue date.

The search engine Google is commemorating the May 1 anniversary with its Google Doodle, a temporary alteration of its logo on the Google home page in Great Britain, Canada, Australia and New Zealand.

Google users in those countries are encountering an image of an irregular block of Penny Black stamps and an envelope franked with a single stamp.

Of the 18 stamps shown, 11 are faded out, so that the name "Google" appears as a silhouette. It might be a little hard to discern, but that's the concept described by the doodle artist, identified on the Google Doodle archive page only as "Kevin."

Imagine the upper four blocks in the illustration as forming a capital "G," the two single stamps following as each representing an "o," and you might be able to work it out to the point where the single stamp on the cover represents the "e" at the end of the name.

It's always terrific to see stamps presented positively to the general public, and even better when a popular and universally recognized entity like Google spreads the word.

There is one element to the image that Penny Black collectors will recognize is absent: the advancing letter combinations on the bottom of each stamp identifying the stamp's position on the pane.

On a pane of genuine stamps, that letter combination changes for every stamp on the pane, beginning with "A" and "A" on the first stamp, changing to "A" and "B" with the next stamp, and so on.

That's a tiny quibble in comparison to the huge nod to postage stamp history that the latest Google Doodle delightfully provides.