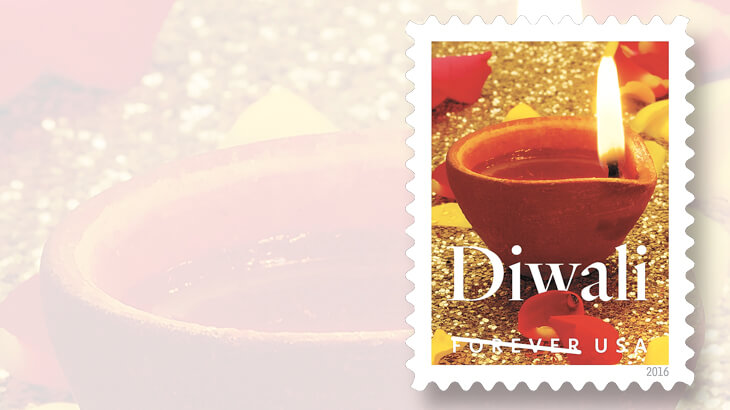 On Oct. 5, the United States Postal Service will issue a forever stamp in honor of the Hindu festival of Diwali. The first-day ceremony is scheduled to take place at the Consulate General of India in New York City.

A previously unannounced United States stamp celebrating the Hindu festival of Diwali will be issued Oct. 5.

The nondenominated (47¢) forever stamp features a photograph by Sally Andersen-Bruce of a traditional diya oil lamp against a sparkling gold background.

“Diwali” is shown in large white letters at the base of the lamp. Diwali is a celebration of good vanquishing evil that takes place over five days in autumn.

“Also known as Deepavali, Diwali celebrates the triumph of good over evil,” the U.S. Postal Service reported in an Aug. 23 news release. “Spanning five days each autumn, it is considered by some to be the start of the new year.

“On the Hindu calendar, Diwali falls on the eve of, or on, the new moon that occurs between mid-October and mid-November. In 2016, the main day of the festival will be celebrated Oct. 29 for South Indians and Oct. 30 for North Indians.

“Diwali is a shortened version of the Sanskrit word Deepavali, which roughly translates as ‘a necklace of lights.’ During Diwali, the flickering oil-wick diyas sprinkle the homes of observers around the world.”

The Consulate General of India in New York City, which will host a first-day ceremony for the new stamp, is observing Diwali on Oct. 30, a Sunday.

The time for the first-day ceremony has not been announced, and in response to an inquiry from Linn’s, the Postal Service could not confirm whether or not the ceremony will be open to the public.

USPS spokesman Mark Saunders told Linn’s that the Diwali stamp will be issued in a pane of 20. Additional technical details for the Diwali forever stamp were not yet available, he said.

This story was updated Aug. 26.